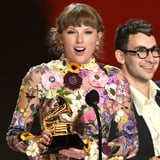 During her speech, Swift took a moment to thank her collaborators, including William Bowery, aka her boyfriend, Joe Alwyn. "Joe, who is the first person that I play every single song that I write, and I had the best time writing songs with you in quarantine," she said in her speech. She also took a moment to shout out friends Blake Lively and Ryan Reynolds, whose kids' names she used in her songs "Cardigan," "August," and "Betty." "I want to thank James, Inez, and Betty and their parents who are the second and third people that I play every new song that I write," she added. She finished off by thanking her fans for all of their support over the years. "Mostly we want to thank the fans," she said. "You guys met us in this imaginary world that we created, and we can't tell you how honored we are forever by this."

Album Of The Year + @taylorswift13 = The perfect 🎶Love Story.🎶 Put on your best “Cardigan” to celebrate this amazing #GRAMMYS win! ✨ pic.twitter.com/pYQfvarTLO

READ:  Reginae Carter Debuts Her Brand New Song At Her Recent Birthday Party—“Feels Good To Be Singing My S**t!”