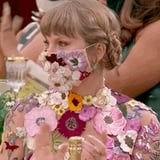 There's no bad blood here. Taylor Swift appeared incredibly excited to see ex Harry Styles win his first Grammy on March 14. The musicians were both up for the best pop solo performance award, and when Harry's "Watermelon Sugar" took the prize, she joined the standing ovation with enthusiasm. You almost have to strain your eyes to catch her reaction in the background, but it's pure joy.

It's been almost a decade since Harry and Taylor were first linked in December 2012. Their romance was short-lived, ending in January 2013, but it was enough to inspire a few tracks on Taylor's 1989 album - and perhaps one or two on Harry's self-titled album. Despite what their songs might express, there seems to be no hard feelings between the two. Last year, Harry praised Taylor's talent and songwriting skills. Flash forward to present day, and Taylor can be seen beaming behind her mask as she claps during the "Fine Line" singer's speech. Growth, you love to see it.

This #GRAMMYS win is ✨so golden! ✨ Celebrate Best Pop Solo Performance winner @Harry_Styles with some 🍉. pic.twitter.com/CF3vZPTJ7x

READ:  The Best Bakeware for Preparing Sweet (but Healthy) Treats