View this post on Instagram A post shared by Kat Dennings (@katdenningsss)
It’s time to party, because Kat Dennings and Andrew W.K. are engaged! On Thursday, the couple announced their engagement via a series of adorable photos on I… 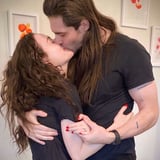 It's time to party, because Kat Dennings and Andrew W.K. are engaged! On Thursday, the couple announced their engagement via a series of adorable photos on Instagram. "Don't mind if I do," Kat captioned a gallery that included a snap of her kissing fiancé Andrew. Fans and friends alike congratulated them on the news, with Kat's Dollface costars Brenda Song and Shelley Hennig commenting, respectively, "Congrats!!!!❤️❤️❤️" and "OUR FAMILY IS GROWING 💕💕🤩🤩."

The announcement comes just days after Andrew confirmed the pair were dating in a press release for his "I'm in Heaven" music video. "In other news, ANDREW W.K. has recently begun dating actor Kat Dennings," the May 6 statement read. "The two met earlier this year in Los Angeles. ANDREW W.K. and his ex-wife, Cherie Lily, began amicable divorce proceedings in late 2019." Andrew and Kat first sparked dating rumors at the end of April, after sharing similar images of each other on Instagram. Kat later changed the link in her bio to Andrew's online shop. Previously, Kat dated Josh Groban from 2014 to 2016 while Andrew W.K. was married to Cherie from 2008 until their divorce proceedings in 2019. Congrats to the couple on their engagement!