Aidy Bryant’s hit Hulu comedy Shrill is coming to an end with its current third season, and if you’ve been a fan from the beginning, you might be worried about whether the show got a chance to wrap things up or just got canceled abruptly. From the sou… 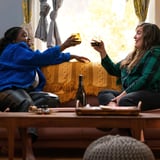 Aidy Bryant's hit Hulu comedy Shrill is coming to an end with its current third season, and if you've been a fan from the beginning, you might be worried about whether the show got a chance to wrap things up or just got canceled abruptly. From the sound of things, it was just a series of circumstances that made the decision for everyone, but that decision was made in time for the creative team to craft an ending on their own terms.

Part of the decision may have been the filming constraints in place due to the COVID-19 pandemic. According to The Hollywood Reporter, creator and star Bryant had previously pulled double duty during filming: the first two seasons were filmed in Portland, OR, during a Saturday Night Live hiatus, so she could then return to SNL immediately. With the pandemic making that setup impossible for the foreseeable future, Bryant had to skip the SNL fall 2020 season in order to stay in the Portland filming bubble for season three of Shrill.

"We are incredibly proud of this upcoming third and final season and are so grateful to the audience who connected with this story. I am deeply honored to have worked so closely with the writers, cast and crew to make Shrill while continuing my work at SNL, it is a time I will never forget. I have endless love for our crew in Portland and I am excited to get back to NY and rejoin my other work family at SNL in the meantime," Bryant said in a statement, according to THR.

READ:  The Best New Books to Put on Your Fall Reading List Immediately

Although no one has come right out and said it, however, it's possible that the decision to end Shrill was not entirely up to Bryant. "We knew later [that this would be the last season], but during [filming]," Bryant told Refinery29. However, the fact that they learned about the show ending before wrapping meant that they had time to craft a suitable ending. "I do feel like we got to make some decisions that led us to a place where we were really happy with it, and that is more than I think I ever would have thought we would get, you know what I mean? To be happy with the end."