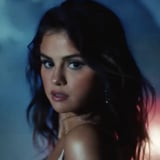 Selena Gomez wasn't messing around when she said she had a Spanish-language album on the way. Following the release of "De Una Vez," the 28-year-old singer dropped another Spanish-language song titled "Baila Conmigo" on Thursday night. This time around, she teamed up with rapper Rauw Alejandro and producer Tainy for the energetic track.

The accompanying video was shot between Los Angeles, Miami, and Brazil, and it's guaranteed to get you dancing. "The video portrays the sense of isolation we all are experiencing right now and how music truly does connect us all no matter where we are in the world," Gomez explained to Pitchfork in a statement.

To make matters more exciting, Gomez also recently announced that her first-ever Spanish-language EP, Revelación, will be dropping on March 12. Get ready to dance, and watch the video for "Baila Conmigo" above.

READ:  Kelly Dodd On Why She Yelled 'I'm Black' During RHOC Reunion