One of the biggest questions we had going into season two of Who Killed Sara? dealt with the identity of the body Alex uncovered in the first season’s final minutes. To us, the most obvious conclusion was that the body belonged to someone who was murd… 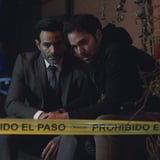 One of the biggest questions we had going into season two of Who Killed Sara? dealt with the identity of the body Alex uncovered in the first season's final minutes. To us, the most obvious conclusion was that the body belonged to someone who was murdered by César Lazcano. After all, we spent a good deal of the first season unraveling the depraved and violent things he's willing to do to get his way and cover up his increasing crimes. Thankfully, the second season proved our theory to be correct, just not in the way we originally thought.

The season one finale implies that the body is Sara herself since it's her death that has been the driving force behind the whole show and the final scene sees Sara being attacked before César shoots. However, it's finally revealed the body is not Sara, but rather her birth-father Abel Martinez Osorio.

Right before her parasailing accident, Sara begins to become paranoid that her mother is going to have her committed to a psychiatric facility. What Sara doesn't realize is that her mother is actually seeking out more information about her father Abel (who also happens to be the father of her best friend Marifer), so that she can understand Sara's schizophrenia. After Sara visits him at a psychiatric facility, Abel lies to Sara to get money from her so that he can escape. Once he escapes, Abel tries to extort Sara for more money before threatening to kill her like he did his wife, Cristina. During the attack, Sara calls Rodolfo for help but César is the who one picks up and comes to her rescue, tying back to the season one flashbacks of Sara screaming and César shooting someone in the rain. César then gets Sergio to help him bury the body, which is how Sergio steals Abel's identity and is able to evade arrest for so many years.

Related:
Season 2 of Who Killed Sara? Finally Gives an Answer to Its Biggest Question - or Does It?
READ:  Idris Elba Reveals He Has New Music Coming With Megan Thee Stallion & Davido!

Alex is only able to find the body because of a map Sara draws in her journal. Whether she was planning on telling him or her mother of its existence is unclear but highly unlikely. Unfortunately, it's also unclear whether Alex will be charged for yet another murder he didn't commit, despite the fact Chema confessed to killing Abel to settle his family's debts with Alex. However, it's possible a season three could see justice for Alex in the end, as César, who faked his own death, says that in this life the only debt he has left is to a son named Alex.