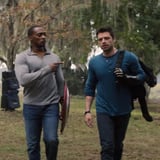 The Marvel Cinematic Universe is expanding right onto our small screens, and we got our first real taste of the upcoming Marvel shows during Super Bowl LV on Feb. 7. Since then, the mega studio has aired a series of trailers featuring Sam Wilson (Anthony Mackie) and Bucky Barnes (Sebastian Stan) wielding Captain America's famous shield.

Taking place after Avengers: Endgame's world-turning events, The Falcon and the Winter Soldier follows Sam and Bucky on a "global adventure that tests their abilities - and their patience." For those who might not recall, Steve Rogers gives up the Captain America mantle in Endgame and passes on the shield to Sam, his close friend and constant companion since Captain America: The Winter Soldier. In the trailers, we see Sam and Bucky teaming up for a mysterious mission, with the latter seemingly prodding the other about taking up the role left to him by Steve. We get flashes of Baron Zemo (Daniel Brühl) and his iconic mask, Bucky getting his butt kicked by some unidentified persons, the return of Sharon Carter (Emily VanCamp), and someone who is definitely not Sam sporting the Captain America costume during a football game.

We have so many questions, but we'll have to wait until the series premieres on March 19 to get some answers! Until then, watch the trailers ahead.

Related:
A Handy Breakdown of All the Marvel Shows Set to Premiere on Disney+

READ:  The Bachelorette’s Clare Just Slammed Dale For Making a ‘Mutual’ Breakup Statement on Her Behalf