“I gave it my all, but sometimes the ‘ALL’ isn’t enough.”
Vicki Gunvalson has confirmed she has split from her fiancé Steve Lodge.
On Wednesday, the former “Real Housewives of Orange County” star took to Instagram to shar… 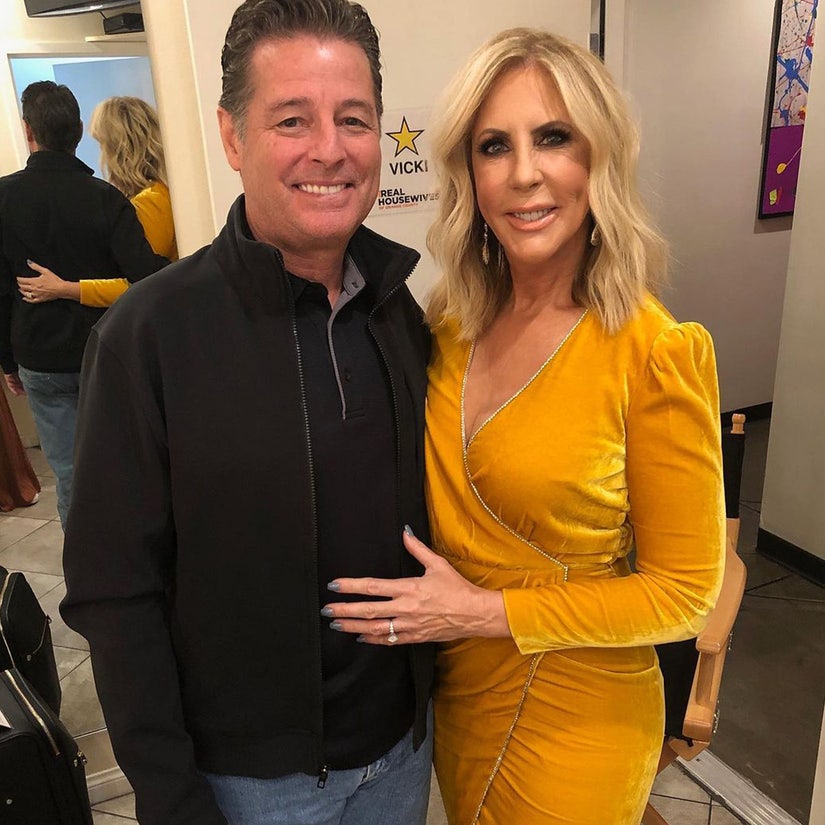 "I gave it my all, but sometimes the 'ALL' isn't enough."

Vicki Gunvalson has confirmed she has split from her fiancé Steve Lodge.

On Wednesday, the former "Real Housewives of Orange County" star took to Instagram to share that the breakup "rumors are true." In her post, Vicki, 59, discussed the split, noting that she and Lodge are both "moving on."

The reality star posted two quotes in addition to a photo of herself and Steve, 63, which had a rip going through its center.

The first image in the post, above, included a "Vibe of the Day" quote for Wednesday. "Once you decide you want a good life, The Universe will start moving things for you to have it, the people you need will appear, the healing you need will happen, the doors you need will unlock," the quote read. "Once you truly, sincerely decide, miracles will happen."

In her caption, Vicki began by noting that the quote is "pretty appropriate for what I'm going through," before opening up about the split.

"It's taken me a day to be able to make a statement after the press started writing about Steve and I," she wrote. "Yes, the rumors are true. The time has come for Steve and I to move forward or move on and we are …. moving on."

"There is no fault with either person, we are just going in different directions," Vicki continued. "I wish him the best life has to offer and to be happy, and he has wished the same for me."

READ:  Netflix Confirms Emily in Paris Season 2 With a Hilarious Letter From Sylvie

"I gave it my all, but sometimes the 'ALL' isn’t enough," she added.

Concluding her caption, the Bravo star said she and the former California gubernatorial hopeful "both have no further comment."

Also in her post -- alongside the "Vibe of the Day" message and the selfie with Steve -- Vicki added a photo of a quote that said, "Sometimes, holding on does more damage than letting go."

Steve, meanwhile, has yet to post anything about the split or make a solo statement.

Vicki and Steve got engaged in April 2019 after nearly three years of dating.

E! News was the first to reveal the news of their split on Tuesday. A source told the outlet that it was Steve who "ended things with Vicki." Another insider said the now-exes previously broke up back in June and attempted to reconcile.

"Steve and Vicki had been living separately for much of the pandemic," the source explained. "Steve had been living like he was a single man in Puerto Vallarta, while Vicki was in the U.S."

According to Page Six, rumors that Vicki and Steve split began swirling earlier this week after the two scrapped pics of each other from their Instagram profiles and had unfollowed one another. However, the exes later went on to refollow each other. It's unclear if Vicki had initially deleted the photos, but a couple of pics of her posing alongside Steve and his mother remain on her profile.

Vicki's marriage to Steve would have been her third. She was previously married to Michael J. Wolfsmith from 1982 to 1991. The two share children Michael Wolfsmith and Briana Culberson. She went on to marry Donn Gunvalson in 1994 and founded Coto Insurance and Financial Services. The former couple split in 2014.