“Oh my god, Becky. Look at her butt.”
If you sit with the fact that those were the first words uttered – by a white woman no less – in Sir Mix-A-Lot’s infamous “Baby Got Back” video, you won’t be surprised by the public’s reaction to its release in 19… 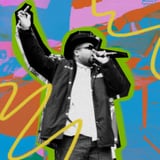 If you sit with the fact that those were the first words uttered - by a white woman no less - in Sir Mix-A-Lot's infamous "Baby Got Back" video, you won't be surprised by the public's reaction to its release in 1992. The video, which opened with the scene of two white actors gawking at a Black woman's shape, was actually banned by MTV for a short time. Close-up shots of posteriors and Mix himself standing atop a 50-foot derriere were also contributing factors to this decision. Additionally, some viewers were concerned that hyperfocusing on a singular body part was vulgar and a blatant act of objectifying women. While that may be true, the real intent of the song deserves a closer look, especially considering the floodgates it opened around perceptions of Black women's bodies - perceptions that keep the song relevant 30 years later.

By his own admission, Sir Mix-A-Lot wrote his infamous hit for representation's sake. He wanted to make a pop hit that celebrated women with curves in a time and industry where rail-thin women were the standard. During that time, curvy girls were even less visible on runaways, magazines, advertisements, and in film and television. Mix used his platform to put big booties on a pedestal, creating another angle from which to admire the female form and naming women of color as the blueprint. For all intents and purposes, it worked. Even with the backlash it received, "Baby Got Back" was the second bestselling song of 1992 and topped the charts for five weeks. While Uncle Luke and 2 Lives Crew's blatant lyrics about booties in songs like "I Wanna Rock (Doo Doo Brown)" were considered raunchy outliers, Sir Mix-A-Lot scored a mainstream hit. It marked a pivotal, prescient shift toward round butts becoming one of most marketable signifiers of beauty and attraction.

Once the standard was set, there was no turning back. Jennifer Lopez was able to climb the ladder to superstardom thanks to her skills as an actress and the notoriety of her rump. (For years, it was rumored that she'd had her butt insured for millions). The hip-hop video vixen era was a who's who of ample backsides, making women like Melyssa Ford and Buffie "The Body" Carruth household names. Later, hip-hop's propensity for strip clubs collided with everyone's ass obsession, to permanently put twerking on the map. By the time Nicki Minaj dropped "Anaconda" in 2014, which was a creative reimagining of "Baby Got Back" from a woman's perspective, things were at a fever pitch. Nicki stirred the pot when she posed for the single's cover squatting in a G-string with her back to the camera. This, too, was seen as shocking and controversial.

A generation of non-Black women, who once thought being thick was the worst thing they could be, suddenly wanted to have thighs and hips to match.

Instagram models gradually replaced video vixens, and women with exaggerated hourglass figures could finally pedestal themselves. They didn't have to secure a placement in someone else's video or on their arm. Kim Kardashian had also started her ascent from socialite, to reality star, to influencer extraordinaire, and ultimately billionaire by playing up the exoticism that came with her ever-growing apple bottom. It was a business model that at least two of her sisters cashed in on, too. Having a big ass was now more than just nice to look at - it was a money maker. A generation of non-Black women who once thought being thick was the worst thing they could be, suddenly wanted to have thighs and hips to match.

Related:
The '92 Effect
READ:  Kylie Jenner hits back at criticism for asking fans to donate money to makeup artist

The opinions and desires of Black folks have always been a driving force in American popular culture and imagination. Sir Mix-A-Lot de-centered the white gaze by simply co-signing what was already normal to Black communities: "I like big butts, and I cannot lie." Black culture is the seasoning of American culture, so it's really no surprise that the song had such a huge impact on the way we view, and commodify, women's bodies. But it's also worth considering the source. Mix's celebration of the ass was framed squarely within a sexualized Black male gaze. In other words, big butts were worth loving because Black men found them attractive. When talking about the inspiration for the song, he told Vulture in a 2013 oral history, "Bottom line: Black men like curves." In this way, some of the initial concerns about objectification were fair.

"Baby Got Back" specifically put Black women's butts at the center of the conversation. Women whose bodies have always been seen as excessive, vulgar, and less desirable. Bodies that have always been scapegoats for morality, sexuality, and politics without the consideration of our agency. Many would argue that in the past decade, there has been an overrepresentation of big booties and small waists. The Brazilian butt lift has become one of the fastest-growing cosmetic procedures in the US, despite its high mortality rate. It is so prominent that in 2022, the butts in the "Baby Got Back" video seems unimpressive in comparison to what can be seen in a quick scroll through Instagram. And while there are so many factors that have contributed to this surge - including Black women having more access to information, resources, and options to make decisions about how they want their bodies to look - the general public has taken a patronizing tone in questioning Black women's self-esteem. Judgements grow louder and louder about which butts are too big, not big enough, too fake, not real enough, or too visible.

The first few moments of "Baby Got Back" - where white women ogle a Black woman in disgust, and a Black man insists he wants to bone her anyway - is the real sneak peek at what Black women would confront for the next 30 years. It's not an unconditional celebration of their bodies, nor is it just the shackles of a narrowing beauty standard. It's the reality that other people will always find a reason to be in Black women's business, always trying to offer validation we don't need or critique we didn't ask for. Baby's got back, but who's got ours?