If you immediately fell in love with Disney+’s High School Musical: The Musical: The Series after watching the first season, feel free to get attached. The mockumentary-style show, which premiered on the streaming service on Nov. 12, 2019, is coming b… 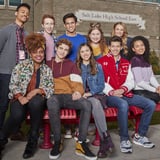 If you immediately fell in love with Disney+'s High School Musical: The Musical: The Series after watching the first season, feel free to get attached. The mockumentary-style show, which premiered on the streaming service on Nov. 12, 2019, is coming back for a second season.

So, when can we expect new episodes? During the Television Critics Association's winter press tour, Disney+ announced that season two is slated to premiere on May 14. Fans previously got a glimpse of the upcoming season during the show's holiday special, High School Musical: The Musical: The Holiday Special, which premiered in November 2020. The second season will follow the East High Wildcats as they prepare to perform Beauty and the Beast as their spring musical. They will also face off against rival school North High to win "a prestigious and cutthroat student theater competition," meaning there are plenty of new faces to be introduced to soon.

Related:
Sharpay Evans Would Be Jealous of the Bond Between the High School Musical TV Show Cast

Even though the spring musical will be Beauty and the Beast, you can still expect songs from the HSM movies in the upcoming season. "I think we will always be a group of Wildcats at East High," creator Tim Federle told POPSUGAR back in January 2020. "I do not think the spirit of the way I want to keep telling these stories is one where there's a Zac Efron joke every three pages. First of all, because I think you can only go to that well so many times before it dries up. And second of all, because to my great delight, while I think we have a bunch of closet fans from the original franchise who said they wouldn't watch it, probably tuned in and realize like, 'Oh, I love this. It's actually brand new and it celebrates my childhood instead of ruining it.' The truth is I don't think what the show is ultimately built on is the strength of those wonderful three movies. I think it's built on this new generation of actors."

The second season will feature new solos written by Olivia Rodrigo and Joshua Bassett, who wrote music for season one. "[It] was such an honor," Rodrigo previously told POPSUGAR about writing music for the second season. "Josh and I always say we're so grateful to have the opportunity to write for a show that means so much for us. It's just really cool that they believed in us teenagers and let us have so much creative control over the music, which is such an important aspect of the show."

As for what fans can expect from the new season, Rodrigo teased that the best is yet to come. "There's new relationships, and new characters, and so much drama," Rodrigo told POPSUGAR. "You think you know what's coming, but you don't. It's always twists and turns."