It’s the second single off of her *newly announced* album!

We’re living for Olivia Rodrigo’s “Deja Vu” lyrics and their meaning. Anyone who’s ever gone through a breakup and watched their ex move on to someone who, uh, looks or acts a lot like you will know exactly what Olivia’s singing about on this new song. But the real question here is, is it about her ex-boyfriend Joshua Bassett? Some fans are drawing the connection, so let’s dive into whether or not this is the case.

Olivia Rodrigo’s “Deja Vu” is the second single off her upcoming album, *O*R, which she announced on Twitter just moments after releasing “Deja Vu” on Thursday, April 1. And no, her new album is not an April Fools’ joke. *O*R is already set to release on May 21, 2021, and follows lead single “Driver’s License,” which reached No. 1 on the Billboard Hot 100 and made Olivia the youngest artist ever to top the chart in Billboard history. No biggie! As if the success of “Driver’s License” wasn’t enough, Olivia decided to follow it up with “Deja Vu,” which she announced just days before its release on with a series of posts on social media on March 29, 2021. 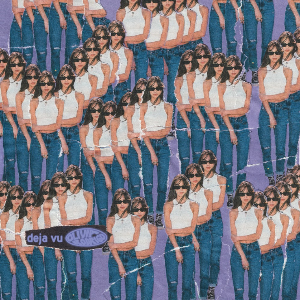 After the release of “Deja Vu,” a song about an ex who moved on with someone similar, many of Olivia’s fans questioned whether the song was about her High School Musical: The Musical: The Series co-star and rumored ex, Joshua Bassett. Olivia and Joshua were rumored to be dating in 2020 after meeting on the series before it was speculated that he moved on with fellow Disney actress, Sabrina Carpenter. When Olivia released “Driver’s License,” theories abounded about its relationship to this love triangle, though Olivia never confirmed nor denied the connection. The music video for “Deja Vu” also seemed to nod to “Driver’s License” with its first scene, which saw Olivia driving along a coastline as she ate ice cream. The music video for “Driver’s License” had a similar scene with Olivia driving alone at night.

This time around, Olivia is still playing mum about its potential references to Joshua and Sabrina—but she did reveal a hint about the song’s timeline. “I wrote this song with my friend Dan Nigro last fall and I’m so stoked to finally share it with you all,” she revealed in her newsletter. “It’s a lot different than “drivers license” lyrically, musically, and melodically, which is super exciting to me.”

The song was already “picked out in September” for her new album, and “sort of took the pressure off for me of following up “drivers license” since we planned this so far in advance.” She continued, “But it’s definitely not like “drivers license” at all, which I’m really happy about. I didn’t want to pigeonhole myself into this category of “sad ballad girl” thing. It’s definitely a little different, and sort of weird. I really hope that people like it, and even if they don’t, that’s cool too though, because I loved making it.” Well, time to find out for yourself—listen to Olivia Rodrigo’s “Deja Vu” and read along for its lyrics, via Genius, below.

Car rides to Malibu
Strawberry ice cream, one spoon for two
And trading jackets
Laughing ’bout how small it looks on you (Ah-ha-ha-ha)
Watching reruns of Glee
Bein’ annoying, singing in harmony
I bet she’s braggin’ to all her friends, saying you’re so unique (Hm)

So when you gonna tell her that we did that too?
She thinks it’s special, but it’s all re-used
That was our place, I found it first
I made the jokes you tell to her when she’s with you

Do you call her, almost say my name?
‘Cause let’s be honest, we kinda do sound the same
Another actress
I hate to think that I was just your type
And I bet that she knows Billy Joel
‘Cause you played her “Uptown Girl”
You’re singing it together
Now I bet you even tell her how you love her
In between the chorus and the verse

So when you gonna tell her that we did that too?
She thinks it’s special, but it’s all re-used
That was the show we talked about
Played you the songs she’s singing now when she’s with you

Strawberry ice cream in Malibu
Don’t act like we didn’t do that shit too
You’re trading jackets like we used to do
(Yeah, everything is all re-used)
Play her piano, but she doesn’t know
That I was the one who taught you Billy Joel
A different girl now, but there’s nothing new