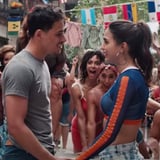 New York City at the height of summer is nothing short of magical, and the trailer for In the Heights perfectly captures its essence. The first trailer for Lin-Manuel Miranda and Quiara Alegría Hudes's Tony-winning Broadway-musical-turned-movie hit the internet on Dec. 12, and now we have even more sneak peeks of the upcoming film. If you aren't already singing "In the Heights" as you read this, I respect your willpower.

Directed by Crazy Rich Asians's Jon Chu, the musical follows bodega owner Usnavi de la Vega - played by Hamilton and She's Gotta Have It's Anthony Ramos - as he explains how his neighborhood "is disappearing." In a story that takes place over three days, Miranda, Hudes, and Chu craft a visually stunning and poignant narrative about community filled with tons of amazing music inspired by the rich Latinx culture of Washington Heights. The trailer just barely brushes over the story, but it perfectly hints to how fun and electric the entire film will be.

Along with Ramos and Miranda (who originated the onstage role of Usnavi and now plays Mr. Piragüero in the film), the cast includes Leslie Grace, Melissa Barrera, Corey Hawkins, Marc Anthony, Dascha Polanco, Stephanie Beatriz, Jimmy Smits, Olga Merediz (another onstage return!), Gregory Diaz, and Daphne Rubin-Vega. Watch the latest trailers below and get ready for the full musical experience when In the Heights hits HBO Max and theaters on June 18.

In the Heights "Powerful" Trailer

In the Heights "Washington Heights" Trailer