Two minutes after she got out — the car detonated.
An Arizona woman who went to Walmart for an oil change claims she ended up with a blown up car instead.
Nikki Smith says she narrowly escaped with her life when her Jeep … 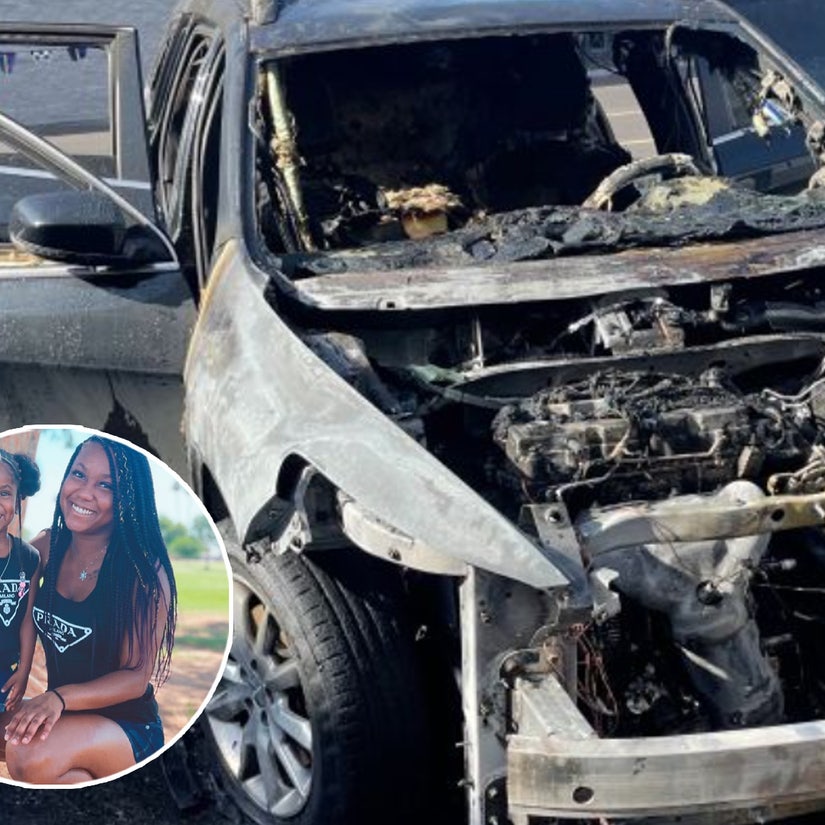 Two minutes after she got out — the car detonated.

An Arizona woman who went to Walmart for an oil change claims she ended up with a blown up car instead.

Nikki Smith says she narrowly escaped with her life when her Jeep went up in a ball of flames at the Walmart Auto Center in Phoenix — and it was just by the Grace of God she didn't have her three-year-old daughter strapped in there at the time, either.

Smith told TooFab she brought the car to the supercenter on Sunday for a routine oil change.  She says the only other issue the vehicle had ever had was a washer reservoir leak — which she had previously gotten fixed at the very same Walmart.

The single mom had owned the car for over a year, driving to her two jobs Monday to Friday, without issue... until the oil change.

"After I took my car to Walmart I started noticing that my car was driving funny and acting as if it did not want to drive," she said. "Then I noticed fluid leaking from my grill."

She claims after lifting up the hood, she discovered the oil cap had not been replaced, and had leaked all over the engine. She says Walmart agreed to take the car back, give it another oil change, and clean up the mess.

According to Smith, they even told her the employee responsible had been fired, and that the next oil change was on the house.

But after she left the premises, she says the car still didn't feel right.

"I had numerous service lights on on my car that I'd never had before, my car had also began smoking, and was not accelerating over 20mph," she claims.

She says she called Walmart again and this time they told her to go to an Auto Zone for a full diagnostic, and to bring the car back. She claims she was told they would fix the lot, pay for the repairs, and put her in a rental. She says by the time she made it back however, the Walmart Auto Center was closed, and she was forced to take the half-crippled car home and come back first thing in the morning, which she says she did... and it was the last time she saw her car in one piece.

Smith claims two minutes after parking and walking into the manager's office, a worker ran in after her to inform them there was smoke billowing from the car. She says by the time they got outside, the car was in flames, before ultimately exploding.

Luckily her daughter, who normally travels everywhere with her, had been left with her grandmother at the time.

In floods of tears, Nikki posted footage on Instagram as she walked around the gutted wreck, completely eviscerated, in the Walmart carpark. She thinks had anyone been in the car at the time, they very likely would not have survived.

But Nikki's nightmare was just getting started. She said the manager was completely unsympathetic and told her there was nothing he could do.

She said she even had to walk home from the store, and was never as much as offered a taxi.

"Never one time did he apologize to me for this heartbreaking issue or even offer any help," she said. "My family and I could have lost our lives and he thinks I'm trying to gain something other than what I came to Walmart with — which is a car."

"I work very hard for everything I have. I work two jobs to provide for my daughter and now I don't even have a vehicle to go to either one of my jobs. I came to Walmart with a perfectly fine car and I had to WALK home with nothing."

Nikki says all she wants is the car she had, replaced — same model and year, nothing more — so she can get to work.

"I'm not looking for any extra money I just need a car," she said. "I just don't deserve to be without a car due to the lack of professionalism at Walmart."

"That was my dream car," she added, as she broke down into tears. "I worked so hard to make the payments on it..."

She said that as soon as she told Walmart she was hiring a lawyer, they went silent.

"So as of now I'm going to have to pay for my own rental car which I'll have to take from my rent money just to get to work," she said. "I'm not looking for money out of anyone, I just want Walmart to do the right thing."

TooFab reached out to Walmart, which would only share the following statement:

"We are aware of the situation, and we will continue working with the customer until the matter concludes."

In the meantime, Nikki has set up a GoFundMe to help pay for a rental car so she can make it to work on time.