The building manager claims the 16 athletes overloaded it.
A Missouri teenage football prospect has been killed in an elevator accident.
JauMarcus McFarland, 18, was crushed to death on Tuesday when the elevator suddenly … 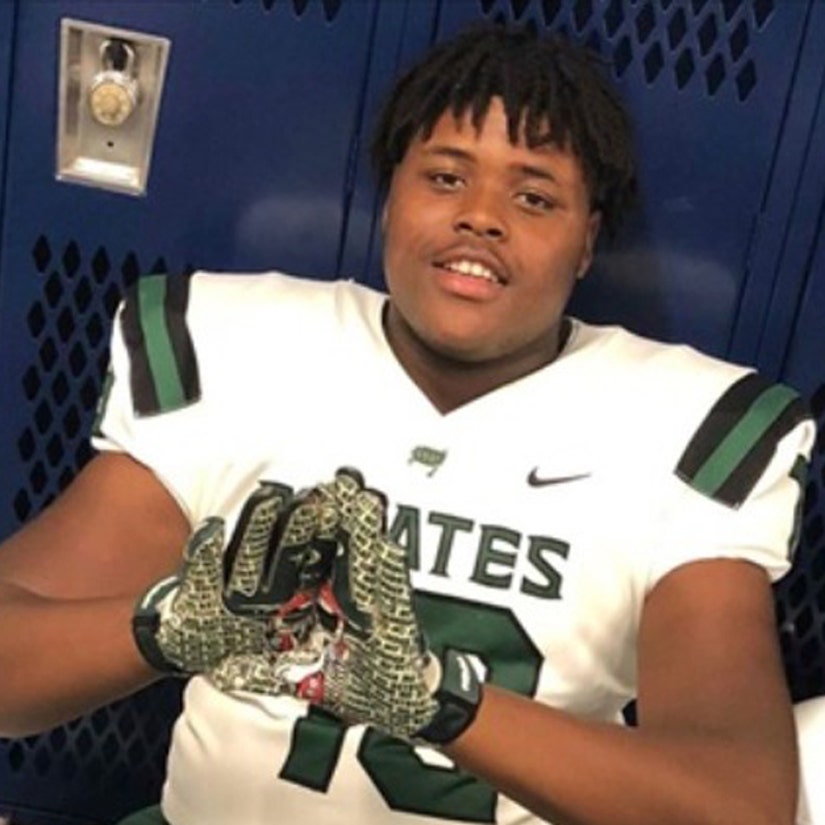 The building manager claims the 16 athletes overloaded it.

A Missouri teenage football prospect has been killed in an elevator accident.

JauMarcus McFarland, 18, was crushed to death on Tuesday when the elevator suddenly plummeted between floors just as he was exiting.

The team from Georgia Prep Academy were staying at 444 Suites Student Housing in Northeast Atlanta, and were making their way to practice around 3 PM, when tragedy struck.

The teen's devastated coach Michael Carson described the desperate final moments to CBS46, as emergency workers fought to save his life.

"They had to revive him there," he said. "They got a heartbeat. They rushed him around the corner to Atlanta Medical Center. He went out again. They were able to bring him back. Then he went out a third time."

The building manager told the outlet that the elevators weight capacity was 3,000lbs; but that there were 16 athletes inside at the time of the accident, collectively weighing 4,000lbs... which may have caused the catastrophic failure.

It is not clear how many students were inside the elevator at the exact moment it fell.

"First, we want to offer our sincere condolences to the family of this young man, his teammates, and his friends," property manager Nathan Phillips said in a statement. "The state inspectors will release their findings in due course, so it would be inappropriate for us to discuss full details until that report is complete."

"What we can say is the weight capacity of the elevator was 3000 lbs. — but the 16 young athletes who were inside the elevator when this occurred pushed that limit to nearly 4000 lbs."

"Unfortunately, this appears to be what started the domino effect of events leading to the unfortunate death of this young man. This is a horrible tragedy, and it deeply saddens us all that this has happened."

Questions are now being raised about the elevator's safety checks: according to CBS, a photo of the the inspection certificate shows it was past due for a checkup — with the last inspection expiring in August 2020.

But the property manager insisted it was not due for its next five-year inspection until 2024, having passed in 2019. He said smaller annual inspections do occur, the most recent one being in December of 2020, when ownership of the building changed hands.

He said the elevator did not have a history of previous incidents — despite some news reports claiming otherwise — and that it was in a constant maintenance program, having been serviced as recently as last week.

"It's actually the responsibility of the state to do inspections, and it’s our understanding that, in 2020, many inspections were not done because of Covid," he said in a follow-up statement. "That said, this owner didn't control the building in 2020, but we do understand the elevator company was in the process of calling for the 2021 inspection and had not yet received a date when this incident occurred."

"It's also important to note that we should wait for the state inspectors to release their findings of what happened, but sadly, it appears the root of this tragedy lies in the fact the weight of these 16 young athletes far exceeded the weight capacity of that elevator."

Either way — family and friends are furious the tragedy was allowed to happen.

"How could you all have an elevator and not inspected it in over a year? That's ridiculous," McFarland's childhood friend Lorna Kershaw told the outlet. "No one should ever have to die as painful as he died."

"It just hurts because he was starting to change his life around," his cousin Demetrius Mays added. "He was happy to play football again, to get away, to try to make it out of where we from. Because where we are from, a lot of people don't get a lot of chances”

An emotional Coach Carson said spoke of his devastation at the cruel loss of a teen chasing his dreams.

"JauMarcus was definitely one of those kids that had the potential," he said through tears.

"You spend your whole life really trying to help kids, particularly our kids, and to have him go out like this, it’s just really heart-wrenching."

He said the 6'6", 300 lbs left tackle was one of his brightest stars, with hopes of getting into a major college and one day playing in the NFL.

"He was one of the leaders on his team. Very respectful, very humble, and very focused. Guys really respected him and his work ethic. We're all just in shock," he told People.

"He knew exactly what he wanted in life. He was one of those kids who had a 3.5 average out of high school but just didn't have the test scores. He was using our program to prep for the ACT [American College Test] in hopes of being recruited this month to be on their college campuses in January. His dream was within reach, it really was just tragically taken away from him."

According to the GoFundMe, "JauMarcus McFarland of Pattonville High School in Maryland Heights, Missouri, had dreams to improve his grades in order to play football in college and earn a bachelor's degree."

"JauMarcus dedicated his life to honor God in all things, especially being a caring teammate. His Georgia Prep Sports Academy / Champions Prep coaches and teammates will dedicate the season in his honor, and invest themselves towards achieving dreams in his memory."

"We know the McFarland family is not prepared for the high cost of a funeral service. We want to provide resources to transport JauMarcus home and help give him the memorial his family will cherish during this horrendous experience."