Miley Cyrus is ready to unveil her seventh studio album! After the 27-year-old singer announced the upcoming LP, titled Plastic Hearts in October, Miley shared the official tracklist on Nov. 13. The album will include her latest original single, “Midn… 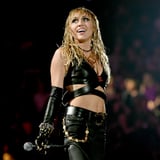 Miley Cyrus is ready to unveil her seventh studio album! After the 27-year-old singer announced the upcoming LP, titled Plastic Hearts in October, Miley shared the official tracklist on Nov. 13. The album will include her latest original single, "Midnight Sky," as well as collaborations with Billy Idol, Joan Jett, and Dua Lipa. Fans who preorder the album, dropping Nov. 27, will also get her covers of Blondie's "Heart of Glass" and The Cranberries' "Zombie".

In a heartfelt Instagram post, Cyrus shared the pink, punk rock-inspired album cover and described her creative journey. "If you're reading this… know that I f*cking love and appreciate you on the deepest level," she wrote. "I began this album over 2 years ago. Thought I had it all figured out. Not just the record with its songs and sounds but my whole f*cking life. But no one checks an ego like life itself. Just when I thought the body of work was finished… it was ALL erased. Including most of the musics relevance. Because EVERYTHING had changed."

The original working title of the forthcoming project was Miley Is Coming, and it was meant to be a continuation of Cyrus's EP series that began with 2019's She Is Coming. However, the songstress decided to take a different route after losing her Malibu home to a wildfire in 2018.

"Nature did what I now see as a favor and destroyed what I couldn't let go of for myself," she continued. "I lost my house in a fire but found myself in its ashes. Luckily my collaborators still had most of the music that was burned up in journals and computers filled with songs for the EP series I was working on at the time. But it never felt right to release my 'story' (each record being a continual autobiography) with a huge chapter missing. If it were a chapter in my book I guess I would call it 'The Beginning' which usually when something is over we call it 'The End'. But it was far from that." She concluded the earnest note, writing, "In triumph and gratitude I present to you my 7th studio record, Plastic Hearts. To be released Nov. 27th 2020."

Cyrus's last full-length album was 2017's Younger Now, which included hits such as "Malibu" and "Rainbowland." Lately, she's been dropping covers left and right, but let's not forget that she has some catchy original bops in her repertoire. So prepare thy queues, and check out the full track list ahead.

Related:
I Won't Stop Playing Miley Cyrus and Stevie Nicks's "Edge of Midnight" Until We Get a Video