Image Source: Getty / Cindy Ord
Lori Harvey stunned at the Met Gala on Monday, and it’s clear that her boyfriend, Michael B. Jordan, is well aware of that fact. Following Harvey’s appearance at the event, the “Black Panther” star posted a photo of Har… 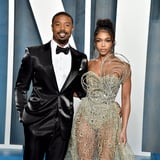 Lori Harvey stunned at the Met Gala on Monday, and it's clear that her boyfriend, Michael B. Jordan, is well aware of that fact. Following Harvey's appearance at the event, the "Black Panther" star posted a photo of Harvey on the red carpet on his Instagram Story. "Probably my fav pic," he wrote beneath the image. "The composition says so much. Birds eye view of a moment you've dreamed about for so long finally manifested & you didn't disappoint! Way to shine babygirl. I love you."

Harvey attended the Met Gala solo, wearing a custom-made Michael Kors gown that highlighted her athletic physique. "I just emphasized that I wanted glamor, elegance, and opulence," Harvey told W magazine of her look. She also gushed over the dress even more on Instagram. "Met Monday," she wrote. "Thank you, @michaelkors, for letting me be one of your muses for the evening! What a moment! I don't think I'll ever be over this stunning dress you made for me." This year marked Harvey's second time at the Met Gala. She attended the event in 2017 when the theme was "Rei Kawakubo/Comme des Garçons: Art of the In Between," attending as one of Dolce & Gabanna's DG Millennials.

Harvey and Jordan have been in a relationship since 2021. They made their red carpet debut at the Vanity Fair Oscars Party in March, where they dazzled in gold and black ensembles. But their relationship is more than just fashion and social media posts; it's also built on the foundation of a close friendship. "Always communicate. Overcommunicate, even, so you are always on the same page," she told POPSUGAR when asked how she keeps her relationship strong. "Also, be friends first. You know how sometimes you fight with your siblings and, of course, you love them, but you're like, 'I don't even like you right now'? It's important to always be friends whether you like the person."

READ:  This Highly-Reviewed Ruffle Dress Has a Gorgeous Surprise in Back