The rapper lived up to his moniker…but what he really needed was a proton pack.
Machine Gun Kelly once went to great lengths to protect Megan Fox from her own house.
While appearing on Wednesday’s episode of “The Ellen … 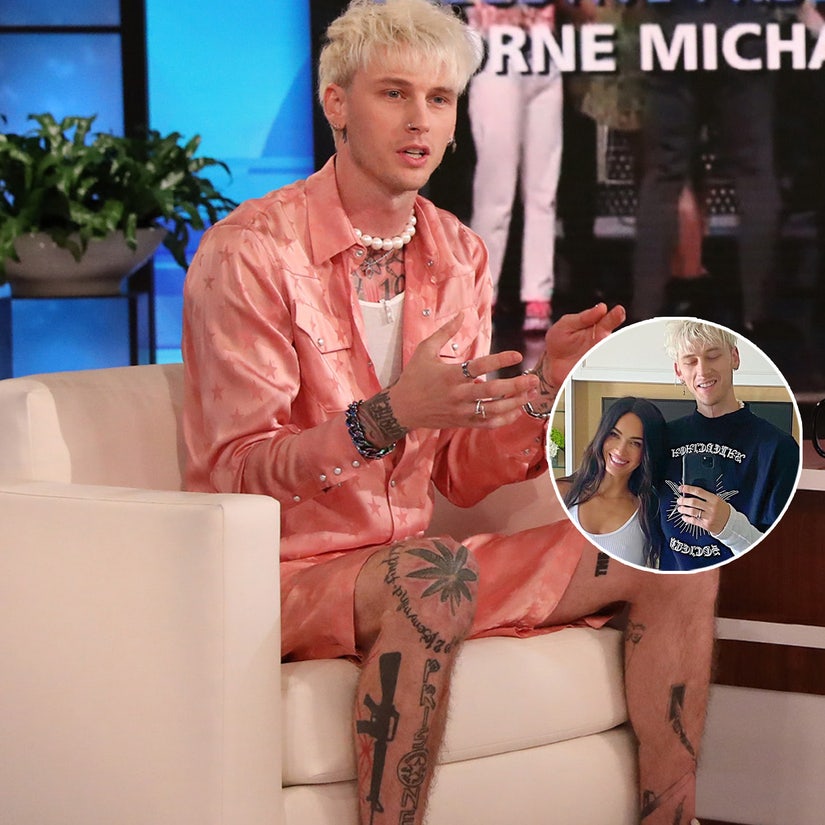 The rapper lived up to his moniker...but what he really needed was a proton pack.

Machine Gun Kelly once went to great lengths to protect Megan Fox from her own house.

While appearing on Wednesday's episode of "The Ellen DeGeneres Show," the singer recalled the time when Fox locked herself in her bedroom after her doors had appeared to be opening and closing on their own. After heading over to the actress' home, Kelly, 31, said he went through the house with a gun in search of the "culprit."

"Early on in our relationship, she had moved into that house and the outside doors were [opening and shutting]," began Kelly, whose real name is Colson Baker. "She called me. She [had] locked herself in the bedroom."

"I came through and I had a weapon to make sure that everyone was safe," he continued, appearing to make a gesture of himself holding a gun. "So I went through the house with the weapon."

"To shoot a ghost?" Ellen hilariously asked to which Kelly replied with a laugh, "We realized we needed Ghostbusters. What I had was not going to defeat whatever enemy was in this house."

"That realization came later, 'cause at first I was looking for a culprit that we later found out didn't exist," he added.

Kelly said his house is haunted as well, but alluded that the threat level is much lower at his home than Fox's.

"Everyone that comes to my house and stays past 7:00 PM, they're always like, 'Yeah, there's definitely something in your kitchen,'" he explained. "And then I realized that those ghosts are just...like high ghosts. They're just always making ghost snacks or like washing ghosts dishes. They're only doing pantry or refrigerator things. Sometimes I'll let off like a 'Thank you!'"

Also during his interview with Ellen, the musician shared the story behind why he has a necklace that contains a drop of Fox's blood.

"She was actually going out of town to film a movie. This was really new in our relationship," Kelly recalled. "I didn't have a passport either. So she was going to Bulgaria. And so I was kind of freaking out like, 'Ah, you're going to leave and I can't even come and see you.'"

"Some people give like a handkerchief to their partner, or whatever -- she gave me her DNA," he said, before then sharing that he brought the jewelry to the daytime talk show and proceeded to show it to Ellen and her virtual audience.

When Ellen then asked if Kelly ended up getting a passport, the "Big Time Adolescence" star said he had -- and revealed it was Senator Bernie Sanders who helped him get one.

"Thank you to the Bernie Sanders team for that," Kelly said. "I made it to Bulgaria and the relationship's going strong. So thank you so much."

The "Bloody Valentine" singer -- who has been dating Fox since last Spring -- also shared details about the couple's unconventional second date: swimming with sharks in Bora Bora. Watch Kelly recall how it all went down in the clip, above!

Meanwhile, earlier in the interview, Kelly opened up about his emotional "Saturday Night Live" performance from back in February. The rapper -- who made his "SNL" debut at the time -- sang two of his songs: "My Ex's Best Friend" and "Lonely." However, Kelly's second performance didn't go according to plan.

"It like it had all these lights and production," Kelly explained. "I got what I asked for, I guess, I was backstage and I cleared the room out and I was just like, 'To the universe, please let me touch people in their homes with raw emotion.'"

Kelly added, "So for the first like 20 seconds, I could kind of just feel that my nerves .. 'cause I was just like, 'Yo, how is this happening? Like dress rehearsal, everything was so good.' And then as soon as the chorus came all the emotions took over and then I think it worked out way better. It felt like everyone connected with just the music."

The moving performance was a tribute to Kelly's dad who passed away last year.

"I had been waiting for a cathartic moment for a long time and it felt like randomly 'SNL' gave me that," he said.

Watch the performance, above.