In light of Prince Harry and Meghan Markle’s recent interview with Oprah Winfrey, a 2018 interview between John Oliver and Stephen Colbert has received new relevance. During his 2018 appearance on The Late Show, John stopped to talk with Stephen a… 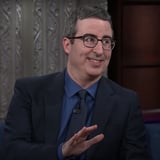 In light of Prince Harry and Meghan Markle's recent interview with Oprah Winfrey, a 2018 interview between John Oliver and Stephen Colbert has received new relevance. During his 2018 appearance on The Late Show, John stopped to talk with Stephen about the upcoming Royal Wedding between Meghan and Harry and why he wasn't exactly excited about the prospect.

"I would not blame her if she pulled out of this in the last minute. I don't think you need to have just seen the pilot episode of The Crown to get a basic sense of she might be marrying into a family that could cause her some emotional complications," John stated. Emotional complications is almost an understatement after hearing Meghan discuss how she was silenced while serving as a working royal and fought with suicidal thoughts while denied support.

In the clip, the audience laughs at John's concerns while Stephen focuses on the fairy-tale aspects of Harry and Meghan's story. "But this generation seems like nice people. They're all nice now, right," Stephen countered as John tried to choose his next words carefully. "I mean, they're an emotionally stunted group of fundamentally flawed people doing a very silly pseudo job," John continued. "That's what she's marrying into. So I hope she likes it. It's going to be weird for her."

The stark difference between Stephen's admiration for the Royals and his expectations for the Royal Wedding against John's blatant worry is reminiscent of how many in the US romanticize the monarchy. Meghan knew she loved Harry and was excited about the prospect of being a part of his family. In their Oprah interview, the pair even discuss how everyone was warm and welcoming until after their Australia trip. Outsiders looking in could see there were bound to be issues, but no one could foresee exactly how drastic the "emotional complications" would be for Meghan's psyche. You can see John and Stephen's full discussion about Meghan joining the Royal family in the clip above.