Travis, 45, proposed to Kourtney, 42, with a massive diamond ring on Sunday, October 17. According to a report by The New York Post’s Page Six, the Blink-182 drummer did not skimp on the cost of the Poosh founder’s engagement ring. Multiple sources who spoke to the site estimated that Kourtney’s engagement ring—which features a stunning oval-cut diamond atop a delicate band—could be worth up to $1 million.

“It appears Travis has bought into the Kardashian family philosophy of going big and going flashy with the enormous oval-cut diamond engagement ring he gave to Kourtney,” said Mike Fried in a statement to Page Six. “It looks to be larger than 15 carats in a pavé or hidden halo setting.” The Diamond Pro CEO valued the ring at around $1 million.

Meanwhile, The Clear Cut founder Olivia Landau estimated the ring to be slightly smaller at “around 8 to 10 carats.” The GIA-certified gemologist added, “It is set in a skinny platinum solitaire style with a pavé diamond band. Depending on actual size and quality it could range between $350,000 and $650,000.” 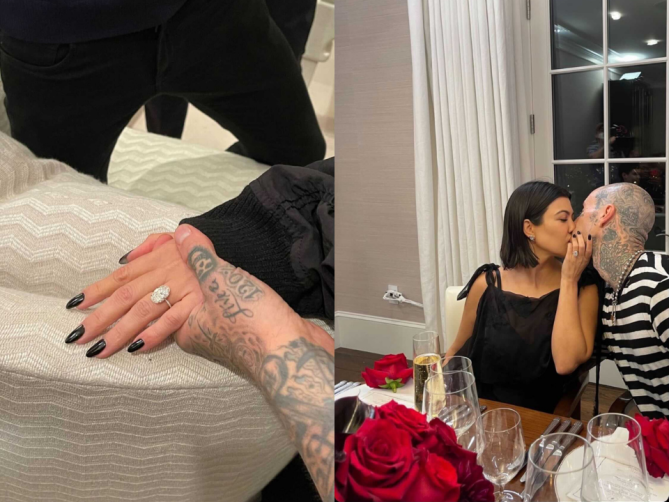 Kourtney and Kim’s younger sister Khloé has also been the recipient of a pricey engagement ring or two. Her ex-husband, Lamar Odom, reportedly proposed with a diamond ring worth around $850,000, per HELLO!. The Good American founder was also rumored to have gotten engaged to her former boyfriend, Tristan Thompson, after she was spotted out with a ring in 2020 that experts estimated to be worth $2.5 million. 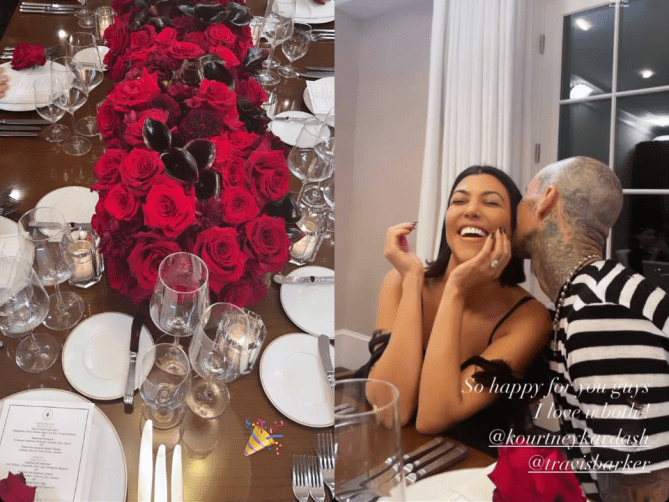 Kourtney and Travis announced the news of their engagement in an Instagram post on October 17, 2021. The Poosh founder shared a photo of her and her now-fiancé on a beach surrounded by candles and roses, captioning the post, “forever @travisbarker.” At the time, a source told People that the reality star wasn’t even expecting the proposal, which took place during a romantic dinner date at a beachside hotel in Montecito, California.

“It was a complete surprise for Kourtney. Travis told her family that he planned to propose, but everyone was great at keeping it secret,” the insider said. “The Rosewood is their favorite for short weekend getaways. They often stay at the hotel. This is why Travis proposed there. It’s a very special place to them, but it was also easier to keep everything a secret by proposing there.” The source continued, “It was a very romantic beach proposal at sunset. Travis took Kourtney for a walk, and you could tell that she wasn’t sure what was going on when she saw all the roses on the beach. Red and white roses were shaped into a heart. There were a lot of candles. They both looked very happy.”

This marks Kourtney’s first engagement. The reality star has never been married but shares three kids with her ex-boyfriend Scott Disick: Mason, 11, Reign, 6, and Penelope, 8. Travis, for his part, has been married twice. He was first married to actress Melissa Kennedy from 2001 to 2002. He was then married to model Shanna Moakler from 2004 to 2008. The former couple share two kids: Alabama, 15, and Landon, 18.

Watch 'Keeping Up With the Kardashians' $0.00+
Buy Now

READ:  Listen To This: Everybody Needs Somebody!