“Shut up, the way you’re talking is wild,” Kourtney said, before breaking down in tears over Kim’s “hurtful” comments.
It wouldn’t be the final season of “Keeping Up with the Kardashians” without one last blowup between sisters K… 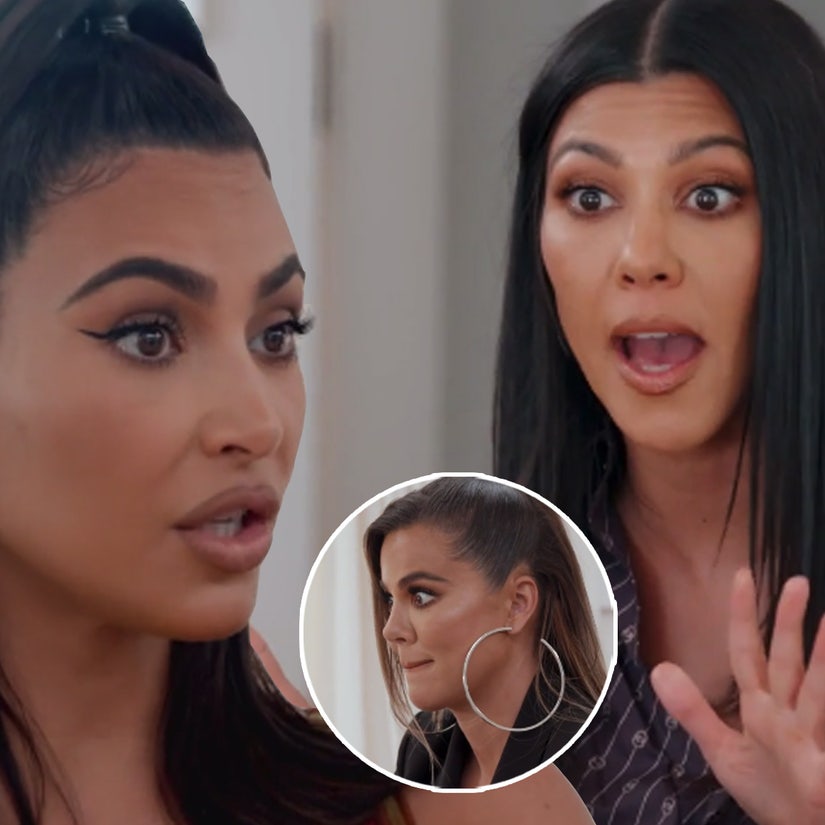 "Shut up, the way you're talking is wild," Kourtney said, before breaking down in tears over Kim's "hurtful" comments.

It wouldn't be the final season of "Keeping Up with the Kardashians" without one last blowup between sisters Kourtney and Kim Kardashian.

On Thursday's new episode, the two got into it again after Kourtney and Kim's nanny "had a little disagreement" during a recent trip together. While we didn't see the argument in question, Kim revealed that the nanny was crying and "thought she was gonna lose her job" when she spoke with Kardashian about it after.

"She said that she felt so degraded by you and you just started yelling at her and you said keep your voice down," Kim said, confronting Kourtney over what happened.

"Oh my god, she's lying," said Kourtney, who claimed son Reign came to her and claimed the nanny told him he'd "go to jail" if he talked in the car. Explaining that Reign is "big on me confronting people" in front of him so he can see Kourtney has his back, she said he wanted his mom to ask the nanny about the jail comment ... and she did just that.

"It should have been private," said Kim. "She said, 'I wish she would have tapped me on the shoulder and said, 'Hey, something's really bothering me, can I talk to you? and we could have talked in private. But for her to yell at me in a restaurant ..."

Kourtney, however, denied yelling at the nanny and claimed a family friend with her at the time couldn't believe what the nanny was saying to her. "She's the one who raised her voice, which is why I said lower your voice," Kourt continued. "If you think she works for you, that's fine. She would never work for me with the way she acts," Kourtney continued. "That's totally your choice. She said, 'Reign, boy, you're a liar.' And I was like, 'Excuse me, you're gonna call a 5-year-old a liar?'"

READ:  NeNe Leakes: Cynthia Bailey Should Have Been Fired From 'RHOA' Seasons Ago!!

While Kim agreed the nanny shouldn't have said that to the kid, she didn't appreciate Kourtney confronting her in public. "I like her, so she's not getting fired," she added, "I like to keep my staff for a long time."

"She will not ever be around my kids," Kourtney replied -- before Kim fired off a low blow by exclaiming, "You can't even keep a nanny!'

"Shut up, the way you're talking is wild," said Kourtney, getting out of her chair and leaving the room as she accused her sister of "projecting all your bulls--- onto me."

After Kourtney left to cry in another room, Kim admitted her words were "hurtful" and said she actually believed both women in this situation. Khloe then took it upon herself to check in on Kourt, while saying in a confessional that "90% of these fights escalate because we start throwing insults." To her, it all came down to negative energy.

"She's just that person that uses the s--- against you. That's the stuff that makes me question, why would you treat your family like that? It's so f----ed up," a crying Kourtney said to Khloe. "You wanna portray me in this way that's not even true? It's just bizarre. I can't be around that energy right now. It's not the energy I need to be around. Why would I want to be around that?"

Kim eventually apologized and admitted she was, as Kourtney put it, "spewing out bulls--- to piss" off her sister. Kim then said she learned this behavior from Kourtney, who said she learned it from their mother Kris Jenner. "The tone turns to mean, on everyone," said Kourtney, "It's just not a good way to be. I think as a family we should definitely work on that."

The three sisters all agreed to be more aware going forward and even made a "Negativity Jar," for the family to put money into anytime they were negative. The person with the least amount of bills with their name on it at the end, gets to keep the cash.

They also talked to mom Kris Jenner about how generational the negativity had become and said they didn't want to pass it down to their children and grandchildren. "I do feel bad about it, I don't want to be Negative Nelly," said Kris after being confronted. "I'm gonna work on that and hopefully get a little better with my attitude."