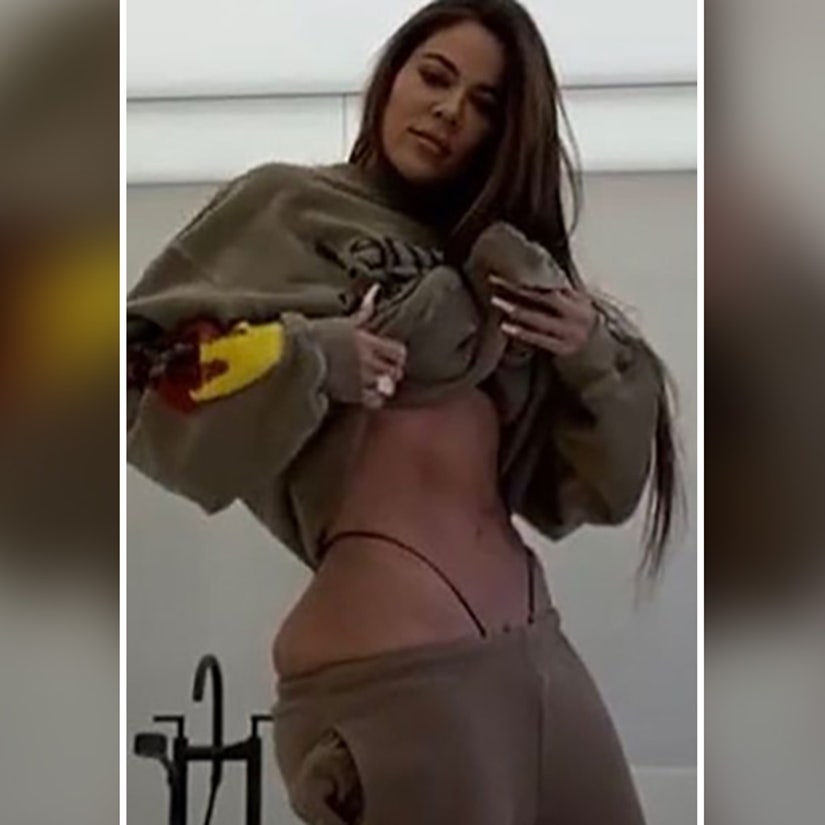 The reality star became the subject of much chatter in recent days as her family sought to take down an unfiltered and unedited bikini pic of her.

Most fans and non-fans alike agree that Khloe Kardashian looked absolutely fantastic in a viral unedited, unfiltered bikini photo of her that suddenly began circulating. The picture also became an almost immediate target of the Kardashian team, seeking to remove all instances of it.

This being the internet, though, it's proven nearly impossible -- especially once the image made its way to Reddit. As the family cited copyright concerns over an image that they had not authorized be distributed, critics decried that the unaltered image was a more realistic ideal that Khloe's fans could strive for.

Now, Khloe has finally broken her silence on the mini-scandal with an Instagram Live session where she shows off her bikini body -- in an effort to prove there are no special effects in use here -- as well as a lengthy statement.

It was in the contents of that statement, though, that fans felt they were starting to see a bit of the truth that Khloe has been living under for all these years in the public spotlight.

"In truth, the pressure, constant ridicule and judgment my entire life to be perfect and to meet other's standards of how I should look has been too much to bear," she wrote.

The reality star then went on to detail some of the most common refrains she's heard over the years, including, "Khloe is the fat sister," "Khloe is the ugly sister," "Her dad must not be her real dad because she looks so different," "The only way she could have last that weight must have been from surgery."

She did then go on, emphasizing that she's not seeking sympathy -- fully aware of the life of privilege she was fortunate enough to be born into -- but rather "to be acknowledged for being human."

She detailed how she has had ever one of her flaws and imperfections analyzed ad nauseum from every photo of her that exists out there, "and I am reminded of them everyday by the world."

While Khloe has grown and matured in the years she's become a staple in American lives, often exuding an incredible self-awareness, intelligence, self-effacing charm and, yes, confidence, she said, "You never quite get used to being judged and pulled apart and told how unattractive one is." Tragically, she said repetition leads to you internalizing it and starting to believe it.

READ:  Jenny Han on the Representation Legacy of To All the Boys: "It's Emotional"

"This is an example of how I have been conditioned to feel, that I am not beautiful just being me," she wrote. As such, she said she will continued to "unapologetically" choose how she shares her body and her image. "It's not for anyone to decide or judge what is acceptable or not anymore."

She then concluded her thoughts with by heartbreakingly suggesting that all the external affirmations of her beauty from family and friends (and even strangers online) isn't always enough. "I know that it needs to be believed from within," she wrote.

While Khloe tried to end on an uplifting note, many fans saw a deeper sadness in her message, a woman saying that she's still struggling with self-acceptance, self-assuredness, self-confidence and believing that she is enough.

The fact she felt the need to expose herself in this way, unfiltered, to assure everyone that she really has the body we see in most of those photos, posed and filtered as they may be, would seem to suggest she still feels a need to prove herself to her haters.

She's worth it in every possible way, but they're definitely not.

Khloe's friends and families quickly jumped into the comments with their own words of support, too. Kris commented that her daughter is "the kindest, most loving, most supportive, most beautiful heart I have ever known and [I] am so proud of you."

She went on to add, "You are an inspiration to all of us and I appreciate and love you each and every single day. Thank you for teaching the rest of us to be kind and to not judge.... you are one of a kind.... what a blessing you are. You are a gift."

Kylie commented, "love you soooo much," while Kim echoed the sentiment, penning, "I love you Khloe. Kendall jumped in to write, "Yes! You beautiful, strong, HEALTHY queen."

Other words of support came from Malika Haqq, who wrote, "I LOVE YOU," and Stassi Schroeder, who wrote, "You are a true QUEEN. Bowing down." Ariana Grande shared her support as well, writing, "love u & youear heart."

Everyone's in DISBELIEF that Khloé is fiercely protective and unfathomably ashamed of how her body looks to the public as if y'all didn't spend YEARS emotionally torturing her for her "real" body. This frantic legal action is her trauma response trying to protect her. Bible.

I feel so bad for Khloe Kardashian. I don’t like her or the family but to be constantly compared to your sisters and called “the fat one” when she was never even fat in the first place, has ruined her self esteem so much. She doesn’t even look recognizable and it’s just sad.

khloe didnt lie in her post cause that’s definitely how it’s always been. 🥴

The way the media treats khloe kardashian breaks my heart. People continuously say that online harassment has brought them to the LOWEST points they’ve ever been in life & yet ppl are so comfortable w being in humane behind a screen? Crazy

Everyone ripping @khloekardashian apart for wanting a photo of herself taken off the internet is tripping. Like you never called your bestie and threatened her life if that picture you hate of yourself didn’t come off her page immediately! 🤣🤣

i just think its weird that people body shames khloe for YEARS and called her the ugly sister but now acting clueless as to why she edits her pics so much .. yall did that to her!

This whole @khloekardashian photo thing just shows how messed up our society is when it comes to women & their image.

When someone is ‘perfect’
We judge. We compare. We criticize.

When someone is ‘flawed’
We judge. We compare. We criticize.

The fact that you’re refusing to acknowledge the hard work that Khloe has put into achieving a body she feels good in is beyond ridiculous. Find a hobby instead of tearing another woman down.😬

I felt so ugly as a child and it sucked and it’s really sad so i’ll always feel for Khloe when it comes to that. Cause like you remember those comments you hear as a kid for life. Teachers telling her “YOU are kourtney & Kim’s sister??”

I don’t have the time to repeat myself so my final reply will be that Khloe can do whatever the hell she wants with her Instagram and her body and everyone else should mind their business. If u don’t want your children looking up to celebrities invest in a therapist for them pic.twitter.com/D6osaIWUgo

I lost the weight & everyone tells me I look good. Yet everyday when I get dressed, each time I see my reflection or a pic of myself, my body dysmorphia takes over. I cry @ the sight of my legs. All bc of the mean things kids said growing up. Thank you @khloekardashian pic.twitter.com/p64FL6oars

- Khloé self esteem is shit, she looks banging in the unedited photo. But I understand why she doesn’t want it out there. People that are digging her out are clearly people who have amazing confidence. Do I care that she photoshops no. Is she still my favourite yes.

Khloe’s self esteem is in the pits of hell. Poor baby.

Khloe going this far to prove a healthy body is so sad. Her “leaked” photo is beautiful too

It makes me sad that @khloekardashian even has to put out a statement about her body and body image. Why do we live in a society where we judge others bodies? Like we’re all human

@khloekardashian as someone who has struggled with body image issues their whole life thank you so much for sharing such an honest, genuine message with the rest of us 🙏🙏

@khloekardashian I wish you could see yourself with my eyes so you would know how insanely stunning you are!!! I'm so sorry that there are some miserable people who can't see others being happy and living their best life. YOU'RE DOING AMAZING, SWEETIE... Don't forget that 😌🥰

READ:  Celina Powell Arrested For Driving With A Suspended License