Tatted up. Kanye West’s girlfriend Chaney Jones got a tattoo of her boyfriend’s name on her wrist. Chaney, who was first linked to Kanye in February 2022, posted a photo of herself on her Instagram Story on May 12, 2022, where fans could see a small tattoo of Kanye’s nickname, “Ye,” inked on her wrist.

Things are getting serious between the Donda rapper and the model, who is said to resemble his ex-wife, Kim Kardashian. The two wrapped up a trip to Tokyo, Japan, in May 2022, where Chaney posted another Instagram photo of the two looking down at a busy intersection. The news of them vacationing in Tokyo coincided with Kanye’s son Psalm’s third birthday party in Los Angeles. 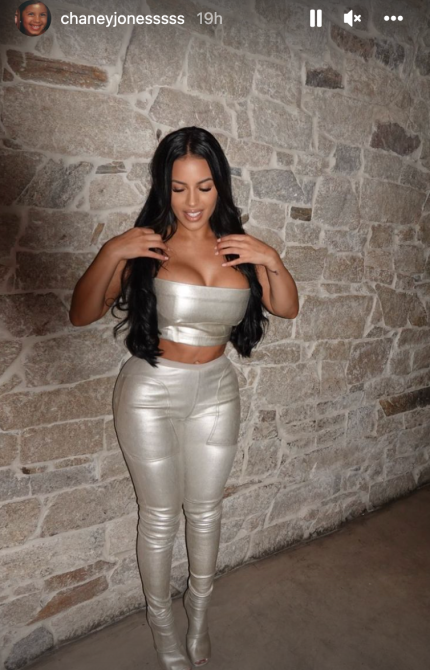 Chaney and Kanye started dating in February 2022. Ye broke things off with brief girlfriend Julia Fox the same month, and immediately moved on to Chaney. Chaney was introduced to Kanye’s extended family on April 4, 2022, during Kanye’s grandmother’s 85th birthday. Since they started dating, Chaney has received comments that say that she looks very similar to Ye’s ex-wife, Kim. Kim responded to the comparisons in an interview on the Not Skinny But Not Fat podcast with Amanda Hirsch in April 2022.  I just want him to be happy and, like, she seems like the sweetest—just whatever makes you happy, I don’t care what it is,” Kim told host Amanda Hirsch at the time. “I think that it’ll reflect in your life and your work, everything and how you are as a parent. As long as he’s happy, I genuinely just want that. Truly.”

The news of the model’s tattoo comes after Kanye’s ex-wife Kim Kardashian’s new boyfriend Pete Davidson was also recently seen with new tattoos that represented Kim and Kanye’s kids. The SNL comedian was reportedly seen with a tattoo on his neck “KNSCP” on May 2, 2022. According to Page Six who first reported the sighting, the letters seem to stand for the initials of Kim and her kids, in order from oldest to youngest, North, 8, Saint, 6, Chicago, 4, and Psalm, 2. Though Kanye reportedly disproved his kids meeting their mom’s new boyfriend, the King of Staten Island star has been seen bonding with them from time and time again.