The rapper was seen on the other side of the world.

Seeing the world. Kanye West and Chaney Jones were spotted in Tokyo at the same time that Kim Kardashian threw her son Psalm’s 3rd birthday party. Jones posted a picture of her and her boyfriend staring down a busy highway on the other side of the world.

On May 5, 2022, Jones posted a picture of her and West looking down Omotesandō street in Tokyo on her Instagram story. The couple was cuddling in the midst of the busy rush hour traffic. Meanwhile in Los Angeles, Kim threw her and Kanye’s son Psalm a Hulk-themed birthday party. The Keeping Up With the Kardashians alum posted many pictures and videos on her story for her little one. Videos of Psalm riding a four-wheel toy and pictures of a corridor of all green balloons filled up her stories during the same time that Jones posted her story.

When asked about her ex-husband’s new relationship with her look-alike, Kim said “I just want him to be happy and, like, she seems like the sweetest—just whatever makes you happy, I don’t care what it is.” Kim explained on the “Not Skinny But Not Fat” podcast on April 12, 2022, “I think that it’ll reflect in your life and your work, everything and how you are as a parent. As long as he’s happy, I genuinely just want that. Truly.” 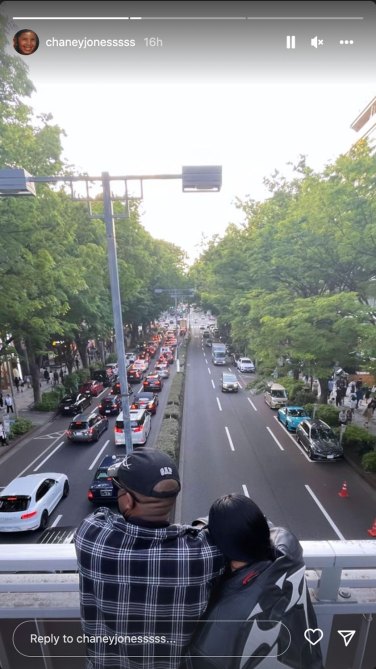 Things are getting quite serious with Jones and West. The model met West’s extended family on April 4, 2022 during Ye’s grandmother’s 85th birthday. Jones first made her appearance as Kanye’s girlfriend at the DONDA 2 listening party in Los Angeles, California on February 7, 2022. On the other hand, things are still going strong between Kim and Pete Davidson. It’s reported that the SNL comedian is getting along with the Skims founder’s kids and was even seen getting a tattoo dedicated to them.