The Biebers have arrived! Justin Bieber and Hailey Bieber‘s Met Gala appearance in 2021 marks the first time the couple has ever attended Vogue’s annual fundraising event for New York City’s Metropolitan Museum of Art. But despite it being their Costume Institute debut as Mr. and Mrs., these two clearly came prepared to serve some memorable looks.

Hailey, 24, arrived at the 2021 Met Gala in a stunning black gown by Yves Saint Laurent, which featured a deep, jewel-encrusted neckline. The model, who has attended Vogue’s star-studded gala since 2015, also paired her ensemble with strappy black heels. Justin, for his part, cleaned up nicely with a black tuxedo and wide-legged pants by his own label, La Maison Drew, which is an off-shoot of Drew House, the clothing line he founded in 2017.

Justin and Hailey, who married in 2018 after years of on-again, off-again dating, have never attended the Met Gala as a pair prior to this year. While fans were previously hoping the Biebers would bring their relationship to the Met Gala carpet in 2019, only Hailey decided to attend at the time. The Tommy Hilfiger model went sans husband to the event in a memorable Alexander Wang gown. The millennial pink dress featured an open back and what appeared to be a bedazzled Alexander Wang thong. 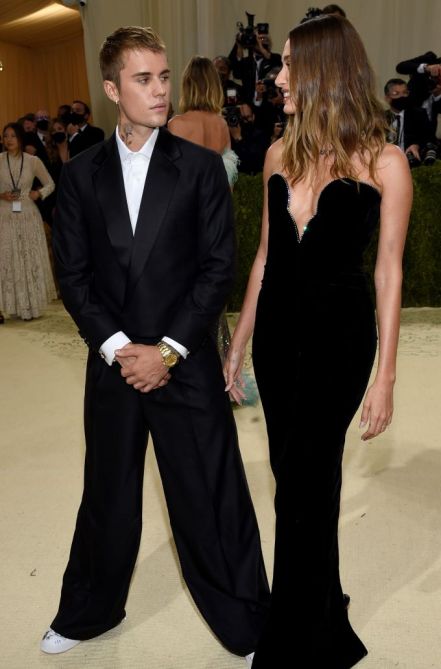 Prior to 2019, Hailey sparked dating rumors with Shawn Mendes when the pair walked the red carpet together at Vogue’s event in 2018. The pair later revealed that they simply attended the event as friends at the request of designer Tommy Hilfiger, who dressed them for the occasion. No less than two months later, Justin proposed to Hailey with a massive oval-shaped ring while on vacation together in the Bahamas. The couple went on to get married in a private courthouse ceremony in New York City in September 2018, and later renewed their vows at their wedding with friends and family in South Carolina in 2019.

READ:  Selena Gomez Stunned in Rust — 3 Dresses to Help You Do the Same

Justin, meanwhile, has only ever attended the Met Gala once in 2015. The “Peaches” singer came along as a guest of Balmain’s Creative Director Olivier Rousteing, and ultimately made headlines for his appearance due to his comments about his then on-again, off-again girlfriend, Selena Gomez. Although the pair were separated at the time, Justin famously told paparazzi that “Selena looked gorgeous at the Met Ball,” while leaving the event.