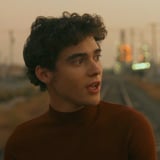 Following the release of his catchy, upbeat single "Lie Lie Lie," Joshua Bassett is slowing things down for his latest track, "Only a Matter of Time." The understated music video sees Bassett standing on train tracks as he croons about a bitter breakup. "An eye for an eye you'll go blind / And when did you stop being kind?" he sings to the camera. While the lyrics are striking in their own right, Bassett's haunting vocals make the track that much more emotional. I'm not even going through a breakup, but I still want to blast the track at full volume. It's like the perfect mix of the Jonas Brothers' "Sorry" and Justin Timberlake's "What Goes Around...Comes Around."

Ahead of the release, Bassett shared a little background about the track. "I wrote this song in the summer of 2020 in a moment in time where social media was bringing a lot of darkness to my life," he said in a statement. "It was healing to put my phone down, turn off the noise and just write. There's good that comes from social media, but it's also become a place where people can say anything about anyone, no matter how false or damaging with no accountability. We've gotta be much kinder to each other and recognize there are real people behind the screens!"

After showing off his incredible talent on High School Musical: The Musical: The Series season one, the singer has been giving fans a glimpse of his own music in recent months. In addition to releasing singles like "Common Sense" and "Anyone Else," Bassett is slated to release his debut EP in early 2021. Back in April 2020, Bassett told POPSUGAR that he hopes fans can find comfort in his music. "In times like these especially, it's nice to have songs that really can calm you down. I hope people find comfort in it, during this time of a lot of people feeling really scared and really alone, so if people find even three minutes of joy from it, that's great to hear."