Bennett discusses whether he’ll follow his character’s footsteps and adopt in real life.
Jonathan Bennett opened up about being cast in the first Hallmark holiday movie featuring a gay couple as main characters.
The groun… 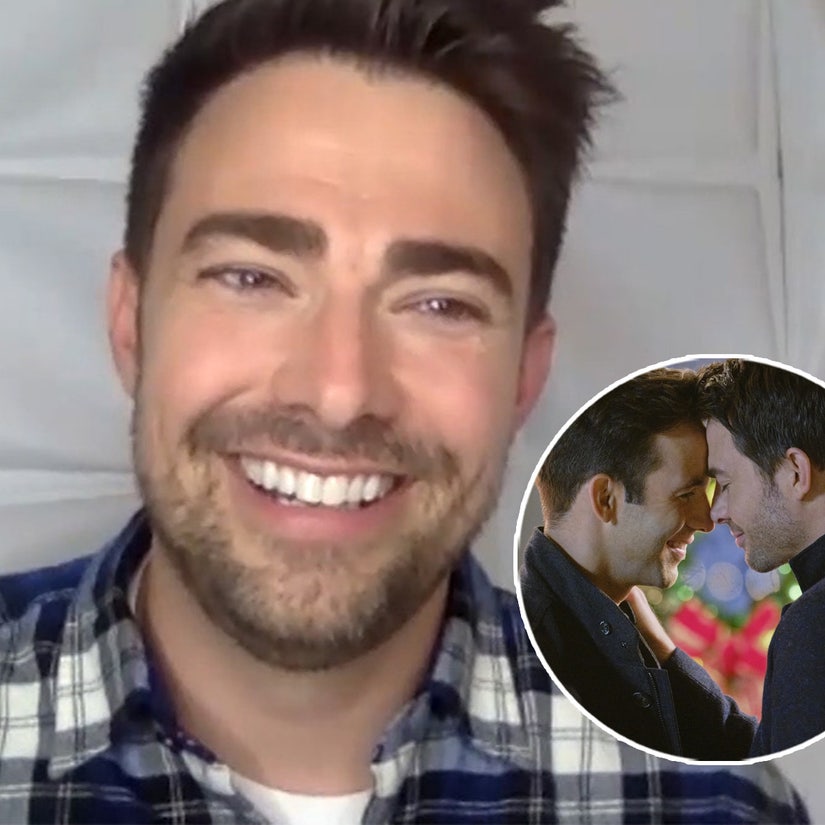 Bennett discusses whether he’ll follow his character’s footsteps and adopt in real life.

Jonathan Bennett opened up about being cast in the first Hallmark holiday movie featuring a gay couple as main characters.

The groundbreaking film, called "The Christmas House," finds Bennett playing Brandon Mitchell, who goes home for the holidays with his husband Jake (Brad Harder) while they anxiously await a call about the adoption of their first child.

"It feels like I'm a part of progress, you know, it feels good," he said while chatting with TooFab. "I can just imagine what younger me, what would this sort of felt like, to see a storyline like this in a Christmas movie growing up. I think representation is very important. And for me to get to represent this storyline and make history on Hallmark Channel is an honor. And it's also very important and I'm really excited that we're doing it."

He went on to reference Hallmark's EVP of Programming, exclaiming, "Michelle Vicary said it the best. She said this year, the holiday table is bigger than ever at Hallmark Channel. And she's absolutely right. The whole network is one big family and just as families do, networks grow and families grow and the holiday table grows. And so the holiday table has grown more and more this year."

Comparing it to other holiday movies, Jonathan said fans will be in for a unique treat.

"It's got some real cool layers to it that are a little quirkier and crunchier than you're used to seeing on the network," he explained. "And I think that's really cool because people identify with that because not every family is perfect and there are crunchy times in families, especially around the holidays when you're all under one roof."

"So you see that happen and then people can identify and say, 'Oh, I feel seen.' Like -- that matters."

As life sometimes imitates art, Jonathan touched upon the idea of adopting his own children with his real-life partner, Jaymes Vaughan, saying, "It's not not a possibility, you know."

He added, "I'm so blessed and grateful to have Jaymes as my partner."

The "Mean Girls" star went on to say how his own family is starting a new tradition, just like in "The Christmas House." For the first time, Jonathan and Jaymes will be welcoming their families to their new home in Palm Springs for Thanksgiving, where they will watch the premiere of the film together, something he never quite envisioned.

"That's a pretty exciting moment," he said. "If you had asked 22-year-old Jonathan, 'Hey, one day you're going to buy a house with your partner and you're going to be openly talking about this in the world and making sure everyone feels represented and seen, and your family is going to come and spend the holidays with you and your partner while you may be trying to start your own family -- like I would never believed you."

And the cast got along "like family," according to Jonathan, which made him appreciate them even more, especially Treat and Sharon, now that his own parents have passed.

"Not having your parents around to be able to watch it was a tough thing to swallow, but at the same time, there are no two people on the face of the earth that could be more special or mean more to have as parents of this storyline in a TV show or TV movie than Sharon Lawrence and Treat Williams," he said, getting emotional.

READ:  Robert Pattinson Admits He's Been Lying In Interviews For Years -- Some Of His WILDEST Fibs!

"They are the perfect choices to play these parents because they are funny, they care and they're huge allies to the LGBTQ+ community. Massive. Like I think it was Sharon that said, 'I was fighting for your rights before you were even born.'"

Start your holiday season with "The Christmas House" on Sunday, November 22 at the Hallmark Channel.