Seven months after Jojo Siwa and Kylie Prew’s breakup, the two are officially back together. The “Dancing With the Stars” alum confirmed their reconciliation on M… 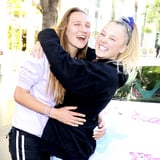 Seven months after Jojo Siwa and Kylie Prew's breakup, the two are officially back together. The "Dancing With the Stars" alum confirmed their reconciliation on May 5 after she shared a PDA-filled photo on Instagram from the pair's trip to Disney World. "If you love something let it go, if it comes back….🤍♾," she captioned her post.

Four days later, she posted another photo on Instagram of the couple kissing in a small polaroid snap with the caption, "Most magical 10 days🤍." Siwa's father also shared Instagram photos of him, his daughter, and Prew on a bunch of Disney World rides. "Ride partners…," he wrote in a caption.

The couple's rekindled romance comes after Siwa said her age and "hectic schedule" contributed to their split. She spoke on the couple's breakup in November during an appearance on Paris Hilton's "This is Paris" podcast. "I have yet to talk about this officially, publicly, but we broke up," Siwa revealed. "But she is literally still my best friend. I talked to her yesterday, she just got a new puppy. She's awesome. She's having the time of her life, I'm having the time of my life." She added: "It just is the definition of a cheesy saying of 'right person, wrong time,' and I hate cheesy sayings, but they're true."

Well, looks like Siwa and Prew found the right time to work through their differences after all!