Out of the spotlight. For years, Johnny Depp’s son Jack Depp has kept a relatively low profile despite his father’s career in Hollywood. While his sister Lily-Rose has seemingly followed in her dad’s footsteps, Jack prefers to lead a more private life. Of course, this only brings up questions for those who have followed Johnny Depp’s defamation trial with Amber Heard, as many want to know what Johnny’s son Jack really makes of the abuse allegations against his father and where he stands with his dad. Luckily, we do have some clues to share about Johnny and Jack’s relationship today.

Johnny welcomed his son, Johnny Christopher “Jack” Depp III, in April 2002 with his then-partner Vanessa Paradis. The former couple, who dated from 1998 to 2002, also share a daughter together: model Lily-Rose Depp, who was born two years earlier than her little brother in 1999. Like his sister, Jack was born in his mother’s home country of France. He was 10 years old when his parents split and his father moved on with Aquaman actress, Amber Heard. Johnny and Amber met for the first time in 2009 while working on the 2011 film The Rum Diary. It was during this time that Johnny began to develop feelings for the Pineapple Express actress, despite still being in a relationship with Jack’s mom: “I felt something I shouldn’t have,” the Pirates of Caribbean actor admitted during an April 2022 court hearing for his defamation trial against Amber, whom he went on to marry in 2015 after several years of dating.

In 2016, Amber filed for divorce from Johnny and was granted a restraining order against him. Their divorce was finalized in 2017 after they reached an out-of-court settlement, which left Amber with a sum of $7 million to later be donated to charity. Things got especially messy, however, when Amber wrote an op-ed for the Washington Post. In her 2018 article, the Zombieland actress described her experience as a victim of domestic abuse. While her story didn’t mention Johnny by name, it became clear to all who read the piece that the Alice in Wonderland star was her alleged abuser. Johnny vehemently denied Amber’s claims and went on to file a $50 million defamation lawsuit against her. Amber, for her part, countersued for $100 million.

Ever since their case first made headlines, many have wondered what Johnny Depp’s son, Jack Depp, thinks of the allegations about his dad. For more details about where their relationship stands now—including whether his son sides with him or his ex-wife Amber—just keep on reading below.

What was Jack Depp’s relationship with Amber Heard? 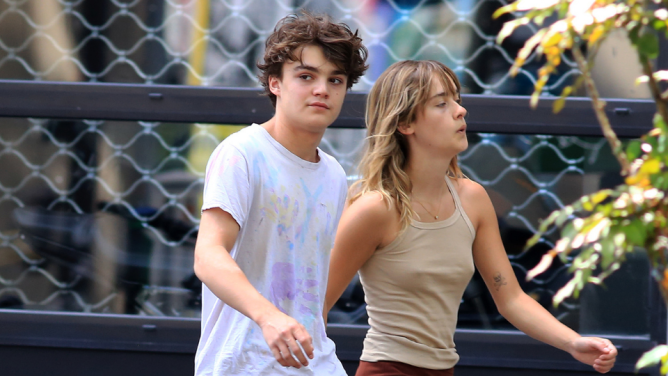 When his dad tied the knot with Amber, Jack was only 13 years old. At the time, Amber suggested that she had a great relationship with Jack and his sister, Lily-Rose, gushing about being their stepmom during an interview with Marie Claire in 2015. She described her relationship with Johnny’s kids as “an honor and the greatest, most surprising gift I have ever received in my life,” adding, “I feel new flavors that I didn’t know existed. New colors that I didn’t know existed have been added to my life. I’m so happy.”

In contrast, Johnny would later describe his kids’ relationship with Amber as “nonexistent” during an April 2022 testimony in court. “My kids are far more intelligent than I am,” he said at the time, before revealing that his daughter Lily-Rose didn’t even attend his wedding with Amber. “She and Ms. Heard were not on particularly great terms, for several reasons,” he shared. While Johnny did not say the same of his son, it’s possible that things were similarly strained between Jack and his former step-mother before her split from Johnny.

What is Johnny Depp and Jack Depp’s relationship?

So, what is Johnny Depp and Jack Depp’s relationship like now? Johnny’s son Jack lives an extremely private life, and as such, has never commented on Amber’s allegations or his father’s trial. But throughout the years, the Charlie and the Chocolate Factory actor has painted a solid picture of his relationship with his son. In 2014, Johnny couldn’t help but gush about his son’s talents. “My boy Jack, has always been a very talented draftsman,” he told the Inquirer at the time. “He draws really super well. He also plays music very well. He’s got a good feel for that. Aside from school plays and things, he hasn’t shown any desire to become an actor. Whew.”

READ:  Dog the Bounty Hunter's daughter Bonnie accuses him of racism and homophobia, says she didn't get invited to wedding

While Jack isn’t following in his father’s footsteps as an actor, he does share some other similarities with his dad. The France-native, for one, bears a striking resemblance to his father. He also seems to have a not-so-lucky track record of being a bad driver. During a 2015 interview with Jimmy Kimmel, Johnny couldn’t help but laugh about his son getting behind the wheel: “He has my instincts, my boy, and he’s crashed about five golf carts,” Johnny joked. For what it’s worth, however, Jack was only 13 at the time, so it’s entirely possible he’s improved since.

After Amber’s allegations became public in 2018, Johnny expressed sympathy for his son for having to deal with public scrutiny over her claims. “I’m sure it wasn’t easy for my 14-year-old boy to go to school; you know what I mean?” Johnny told GQ in 2018. “With people going, ‘Hey, look at this magazine, man. What, your dad beats up chicks or something?’ Why did he have to go through that? Why did my daughter have to go through that?” Johnny continued to express his desire to protect his son and daughter from criticism throughout the years. At the start of his defamation trial in April 2022, the actor shared that he felt the need to “clear the record” for the sake of his kids. “It was a complete shock,” Johnny said of Amber’s allegations. “It just didn’t need to go in that direction as nothing of the kind had ever happened. In the relationship, there were arguments and things of that nature, but never did I myself reach the point of striking Ms. Heard in any way, nor have I ever struck any woman in my life.”

Johnny continued, “The news of her accusations had sort of permeated the industry and then made its way through media and social media became quite a global, let’s say, ‘fact,’ if you will. Since I knew that there was no truth to it whatsoever, I felt it my responsibility to stand up, not only for myself in that instance, but stand up for my children.” He added, “I wanted to clear my children of this horrid thing they were having to read about their father, which was untrue.” While Jack has yet to weigh in on his father’s comments, it’s clear where Johnny stands as a father today.