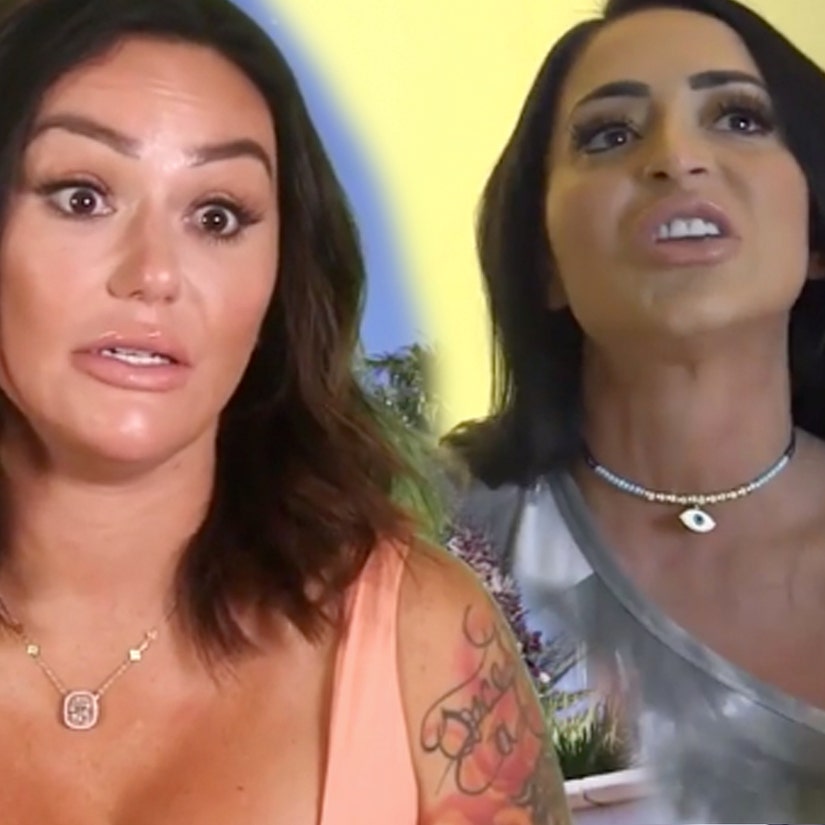 "The f---ing girl's unpredictable," Angelina exclaims -- while JWoww makes it clear she had NO desire to ever be friends again.

While viewers have anxiously been waiting for Angelina Pivarnick and Jenni "JWoww" Farley to come face to face on "Jersey Shore Family Vacation," Angelina wasn't exactly thrilled to hear Jenni would be joining them in Las Vegas.

After she successfully buried the hatchet with Deena Nicole Cortese the previous episode, Angelina was riding on a high ... a high that she came crashing down from once Ronnie Ortiz-Magro told her JWoww would be showing up the next morning.

"I don't like this," Angelina responded. "If she comes in with no problems, that's fine, but I don't know. I don't know what she's gonna do. It's just concerning to me that she's unpredictable. Last time, there was almost bottles thrown."

While Deena said she was "a little bit nervous" that the boys were trying to rush a reconciliation between them following the wedding speech fallout, Mike "The Situation" Sorrentino said he was confident they could find a way to "co-exist" going forward.

Ronnie then had a private conversation with Angelina, where he tried to find out whether she would simply say she was sorry for "all the bulls---" and move forward, or decide to confront Jenni over every single detail of their long-simmering feud when she arrived. The more Angelina spoke, it became clear she was leaning more toward the latter.

"You have to be the bigger person," Ron told her. "She should be the bigger person! It’s draining for me to always be around the drama," Angelina shot back. "She never admits her wrongs, ever. She's nuts. It's annoying. I'm never gonna deal with this again."

She then stormed out of the room, telling everyone to "get away" from her while screaming, "I can't take it anymore, I'm not dealing with this!"

In a confessional, she then began crying, while Ron told producers she needs "to get like mental health with this thing."

"The f---ing girl's unpredictable. It's been 11 years of back and forth and s— all the time," she said through tears. "This whole entire trip has been great until this point but this girl always tries to sabotage it. Always. I'm just over it, mentally. It's been 10 months. I don't even want to f—ing deal with this right now."

Speaking with Mike's wife, Lauren Sorrentino, Angelina then said she had no plans to apologize.

Once Jenni touched down in Vegas, she said she had no desire to ever be friends with Angelina again -- and though she'd be okay to sit around the dinner table with her, she didn't want to open the door to anything more than that. She also said she understood Deena's decision to squash things with their costar, despite getting caught in a text message telling her not to.

The hour ended with them all sitting down to dinner, just as the two saw each other in person for the first time since the wedding. A preview for next week showed Dr. Drew arriving to therapize the group -- but Angelina appears to be MIA from the session. Stay tuned!

READ:  The Little Things: Need to Talk About That Ending? OK, Us Too