Angelina exposes texts her cast members didn’t know she saw, Deena and JWoww call BS on her olive branch and the boys are caught in the middle.
Snooki may no longer be part of “Jersey Shore Family Vacation,” but, if the season pr… 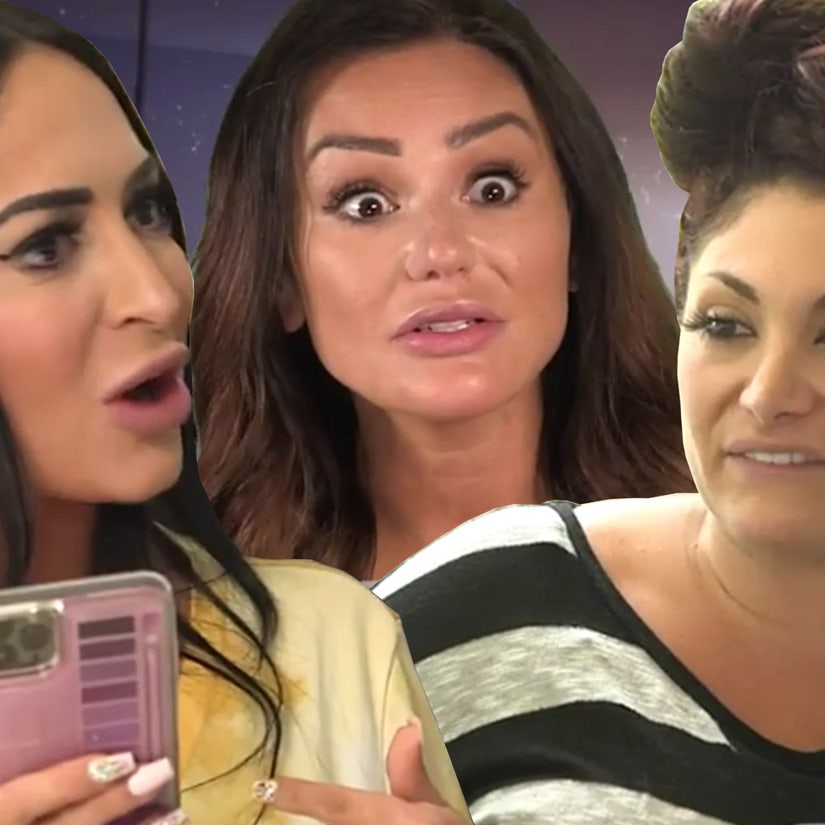 Angelina exposes texts her cast members didn't know she saw, Deena and JWoww call BS on her olive branch and the boys are caught in the middle.

Snooki may no longer be part of "Jersey Shore Family Vacation," but, if the season premiere is any indication, there's still plenty of drama to go around without her.

The two-hour premiere detailed the immediate fallout from Angelina Pivarnick's wedding, where Jenni "JWoww" Farley, Deena Nicole Cortese and Nicole "Snooki" Polizzi sent the bride into a tailspin with their toast during the reception. In case you forgot, the trio was booed after they trashed Staten Island, brought up Angelina's previous failed engagements and called her "the fly to our shit."

The premiere picked up just two days after the ceremony and Angelina was still livid -- saying the women "ruined the night" for her. She proceeded to call the jokes in the speech "a little f--ked up" as her husband, Chris, called her costars' behavior "unacceptable."

While Angelina said the women apologized via text after the ceremony, she kept scrolling up the group chat and realized the whole cast had been texting about her without realizing she was also on the thread.

"It was a group chat, Deena started it. It said, 'I will never film with her again,'" she claimed. "And then Mike writes, 'Who are you talking about?' Deena writes, 'ANGELINA, Mike.' And then Snooki wrote, 'Same.' And JWoww wrote, 'I'm glad we're all on the same page. That was just it for me.'"

The tense situation between all the women only intensified in the days to follow, as audio of the speech leaked online and made headlines. For Jenni and Deena, that meant a wave of backlash aimed at them on social media -- as JWoww said she had "never experienced what we're experiencing right now."

READ:  Texas Mom Who Pretended Life-Size Doll Was The Daughter She Threw in Lake Sentenced to 20 Years

While Jenni said her comments were flooded with trolls saying she "should die and get kicked on and spit on," Deena said fans told her that her "son deserves to be bullied" and they would "punch" her in the face if they ever saw her in person. To them, Angelina was only fueling the fire by liking some of the nasty messages and saying on social media she wanted to re-do her wedding. They felt Pivarnick was using the backlash as an opportunity to "destroy" them. At this point, Deena didn't think she could even be in the same room as her again.

As far as everyone else in the cast was concerned, the boys didn't believe the girls were trying to be malicious with their speech, but said Angelina still had every right to be upset. They also didn't believe the three should have been bridesmaids or given a toast -- while The Situation's wife, Lauren, said Angelina should have expected it to be inappropriate. Ronnie went so far as to call Angelina and basically tell her that, reminding her she and Jenni were in a brutal fight just weeks before the wedding and pointing out how she even laughed during the toast at first.

"You're not the one to give me advice about drama, that's for sure," Angelina said of Ron in a confessional.

The show then went on a filming hiatus and picked up two months later. By that point, Snooki had announced she officially quit the show, after experiencing much of the same backlash as her costars. Jenni had also reunited with Zack Clayton Carpinello in that time, saying he was there for her when she needed the support. She and Deena, however, had still not spoken with Angelina.

READ:  Kanye West Back On Twitter As Pal Elon Musk Takes Over -- See What Other Changes The New Owner Has Brought!

Mike called a family meeting with Vinny, Jenni and Deena at his home, officially dubbing himself "The Mediation" as he tried to broker a peace agreement between all the ladies. Deena was adamant there would "be no reconciliation" with Angelina, while Jenni said the only way to move forward was "without her."

"Why are we having someone in our little circle that doesn't give a shit about us?" Deena wondered. "If she's not around, I will be there. I've never been more sure about a decision in my life."

The Sitch, er, Mediation then went to Angelina's to try and hear her out. She was still running hot, however, and said she was "sick and tired of taking the high road with" the other women. "It's draining, they don't like me, they made it very clear they don't want to be around me," she added.

Mike told her to extend an olive branch, which she did via a lengthy Instagram post. The post -- in which she said she had "forgiven" them for the speech and wouldn't let a few jokes "ruin what we have rebuilt over the last couple of years" -- was not well-received. In fact, it only further infuriated them.

Jenni wound up sending Angelina a book of a text message, asking why she felt the need to post on social media and didn't reach out to them directly. She also accused Angelina of only reaching out to Snooki because she saw the backlash she was getting for "the path [she] chose." That, of course, got Angelina all fired up again ... and she eventually deleted the post.

READ:  That Scream! Inside Kaitlyn Bristowe and Jason Tartick’s Engagement

The second hour of the two-hour premiere picked up further into the pandemic, with the cast all quarantining in their respective homes. Deena had stocked up on food and diapers, Ronnie had settled down in a new home in L.A., Vin was hiding from Uncle Vito and Pauly D not only had a new beard, but a girlfriend, Nikki Hall from "Double Shot at Love."

In an attempt to break up some of the tension, Mike decided to prank Deena and Jenni after inviting them and Vinny over for a socially-distanced hang. At one point during the BBQ, Lauren snuck away, threw on a black wig and pretended to be Angelina arriving to their home. Though both women were momentarily alarmed, they quickly recognized Lauren's butt.

Later, Vin, Mike and Lauren went to Angelina and husband Chris' place, where Vinny apologized for diminishing the wedding situation on social media when the episode finally aired. Both Angelina and Chris appreciated the apology. Lauren, however, told Angelina she was making everything more "dramatic" than it needed to be.

"It's not that dramatic," she said, urging Angelina to take the high road. "I would never destroy my wedding over such a petty thing." Pivarnick, of course, didn't agree.

While there was no resolution whatsoever between Jenni, Deena and Angelina, the rest of the season will find the boys doing their best to squash the beef. A new supertease showed them all reuniting to film at an empty Las Vegas resort during lockdown -- and what appeared to be a do-over of Angelina's wedding and the disastrous speech.