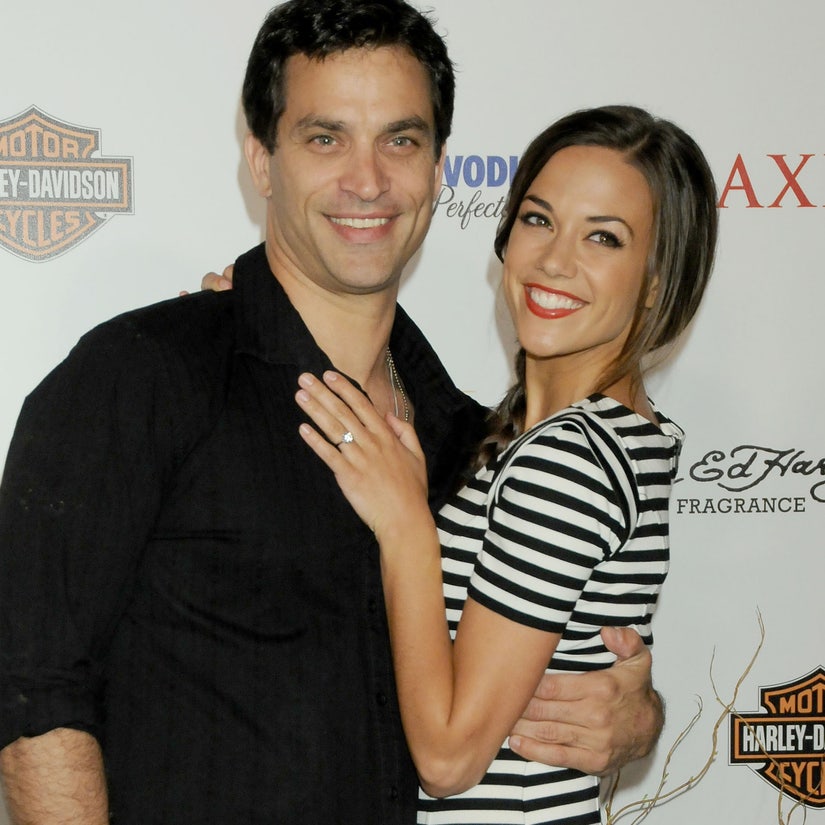 Jana Kramer was less than thrilled when ex-husband Johnathon Schaech made headlines by taking a virtual trip down memory lane and shared a photo from their wedding day to social media last week.

The "Legends of Tomorrow" star and "One Tree Hill" alum tied the knot in 2010, but announced their split just one month later. The date of separation on the divorce docs was just 12 days after the wedding.

I had to explain this photo to my son today. I told him I’ve been married three times. But I got it right when I married his mother. @kramergirl and I lasted a week. We weren’t meant but for this photo and friendship. pic.twitter.com/S0xA1qPOm6

Kramer and husband Mike Caussin addressed Schaech's Twitter post on Monday's episode of their Whine Down podcast. The two were talking about Rami Malek asking Rachel Bilson to remove a high school photo of them from her Instagram page, when Kramer said she could relate.

"My ex husband, he technically was a husband, he tweeted out a picture of our wedding day and said, 'I had to explain this photo to my son to tell him that I've been married three times and his mother was the one I should have ended up with.' But he tags me in it," she explained. "First of all, why are you tagging me in it? We're friends, his wife is my best friend, we've been great, but it kind of rubbed me wrong."

"I, A, don't want a photo of me technically on our wedding day. Why are you posting a photo of our wedding day? That's in the past. I don't want to see that photo on my Twitter and now you're tagging me in it. It bothered me," she continued. "I ended up texting John because he continued commenting about how it was a horrible day and nothing was real about it. I was like, 'Can you be nice and not say mean things about me on Twitter?' He's like, 'It wasn't real.'"

"Part of me wanted to text him like, 'Can you take that down? I don't understand. I know it's stupid, because we thought the Rami thing was stupid," she said, saying neither she or her husband would ever post a photo of an ex on their pages and added that she was "annoyed" by the whole situation.

She went on to explain that the photo itself wasn't the problem, but the comments he started making in the replies. "I get we ended up breaking up a week later but you don't have to comment so negatively," she said. "You're saying we're friends, but saying how awful it was. That's now, not nice."

"I was like, 'Be nice.' He was like, 'It was all a lie,'" she added. "For him to say that, that's actually not accurate. Just because we broke up, it doesn't mean it's a lie. The thought about posting any ex, I just would never do that. I don't understand."

"I had to explain this photo to my son today," Schaech wrote on Wednesday, alongside a photo from the nuptials. "I told him I've been married three times. But I got it right when I married his mother. @kramergirl and I lasted a week. We weren't meant but for this photo and friendship."

When one follower replied to the photo saying, "It's still a cute picture. I hope you have nice memories of that day," he responded with a simple, "Nope." He later shared some lyrics from a Kip Moore song, writing, "Life's a lonely, winding ride Better have the right one by your side And happiness don't drag its feet And time moves faster than you think."

He went on to make it clear he didn't go out of his way to show the photo to his 7-year-old son, Camden, but the boy simply found it while on his dad's iPad. He also said the kid "sees [Jana] and [husband Mike Caussin] all the time" -- and said the only "awkward" thing about the situation are the "pics of us all moving to Nashville the same day / on the same flight."

"My wife @JulsSolomon and @kramergirl are best friends," he added, "Mike and I are brothers."

Kramer married Caussin in 2015 and the two share two children together. Schaech, meanwhile, married Julie Solomon in 2013 and, in addition to son Camden, are also parents to 9-month old daughter Lillian.