Get to know her talented twins here.

To the rest of the world, J-Lo is known as the kind of superstar who can sing, act, and dance her way around anyone. But to Jennifer Lopez’s kids, she’s simply mom (ok, ok; she’s also a supermom at that). Lucky for them, they get to be a part of J-Lo’s star-studded life. And it’s not only their mom who’s famous—their dad, Marc Anthony, is a legend in his own right. The salsa singer is a three-time Grammy Award and six-time Latin Grammy Award winner, among other things.

When it comes to J-Lo and Marc Anthony, their relationship first kicked off with dating for a brief stint between 1998 and 1999. It wasn’t until after J-Lo called off her engagement with Ben Affleck (and Marc ended things with former Miss Universe, Dayanara Torres) in 2004 that the pair rekindled their relationship. They quickly got engaged and went on to tie the knot that year in a secret wedding ceremony. By 2008, the married couple welcomed their twins—one son, and one daughter.

Unfortunately, J-Lo and Marc’s marriage didn’t last. The pair announced their separation in July 2011, saying in a statement at the time, “This was a very difficult decision. We have come to an amicable conclusion.” It was Marc who eventually went on to file for divorce from Jen in 2012, citing “irreconcilable differences” at the time. In an interview with W Magazine in 2016, Jennifer admitted that while things weren’t always “easy” following the divorce, she continues to work on her relationship with Marc for the sake of their kids. “When my marriage ended, it was not easy to find forgiveness. It wasn’t the dream that I had hoped for, and it would have been easier to fan the flames of resentment, disappointment, and anger,” she told the magazine. But Marc is the father of my children, and that’s never going away. So, I have to work to make things right. And that is, by far, the hardest work I do.”

For everything to know about Jennifer Lopez’s kids with Marc Anthony, just keep on reading. 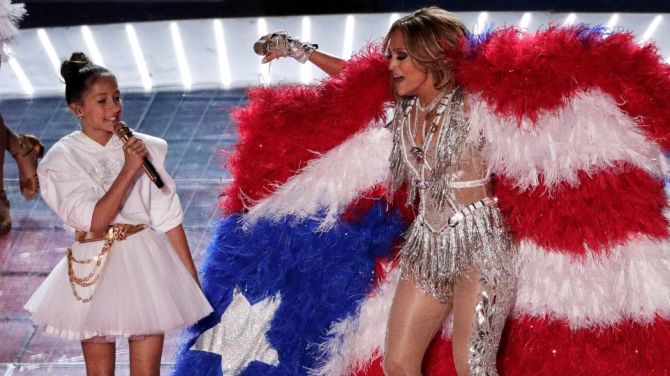 There’s no denying that Emme is J-Lo and Marc Anthony’s daughter. The teen is basically J-Lo’s mini-me—and she’s already well on her way to becoming a superstar just like her parents. Case in point: Emme was bold and brave enough to join her mother on stage at the 2020 Super Bowl Halftime Show, where she sang J-Lo’s very own “Let’s Get Loud” before her epic segue into Bruce Springsteen’s “Born in the USA.”

As if that wasn’t already impressive enough, Emme is also officially a published author. J-Lo’s daughter released her first children’s book, Lord Help Me: Inspiring Prayers for Every Day, in 2020. “So proud of my lil coconut

Emme, as she shares her own daily prayers in her very first book LORD HELP ME,” Jennifer wrote in an Instagram post announcing the book. The book, which was published in both English and Spanish, offers families “a way to embrace the peace and power of everyday faith,” J-Lo added. As for another little-known fact about Emme: she has two nicknames. The first, “coconut,” is one she shares with her twin brother. But mom J-Lo also calls her “Lulu.” Jennifer revealed the sweet nickname in an Instagram post she shared before their legendary Super Bowl LIV show.

Don’t think that all the talent stops with Emme. J-Lo and Marc Anthony’s son, Max, is also a natural. The teen—who, by the way, is basically the spitting image of his dad—is a great singer and has even been seen playing instruments on J-Lo’s social media. According to J-Lo, he also has a great sense of humor: “My favorite thing about Max is his sense of humor and his incredible vocabulary,” she said in a sweet video on her YouTube channel. “Also your big heart, you have an enormous heart and you are always so caring,” she told her son.

READ:  RHONJ’s Robyn Levy Recalls Her Falling Out With Teresa and Joe Giudice

Max is also the very proud owner of the Lopez-Muñiz family’s dog, Tyson. J-Lo revealed that she got her son a Goldendoodle puppy back in June 2020.

For more about J-Lo’s life, check out True Love by Jennifer Lopez. The 2014 memoir covers the “Jenny on the Block” singer’s career and personal life, from her start as a dancer to when she became a mom of two twins with her now-ex-husband Marc Anthony. In the book, which includes more than 200 personal photographs from J-Lo’s never-before-seen collection, the Selena actress writes about how “she confronted her greatest challenges, identified her biggest fears, and ultimately emerged a stronger person than she’s ever been” to become the pop icon we know today.