There is no doubt that The Kardashians on Hulu falls squarely under the reality TV category. But their delivery of reality is strategic. It’s as polished as the drones slicing through their various residences and businesses and as high of a production… 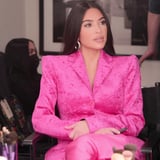 There is no doubt that The Kardashians on Hulu falls squarely under the reality TV category. But their delivery of reality is strategic. It's as polished as the drones slicing through their various residences and businesses and as high of a production value as their brightly lit confessionals. The Kardashians are selective about what they let their fans see, and rightfully so.

In the KarJenners' profile with Variety, Kim Kardashian talked about how her 2016 robbery in Paris led her to be more cautious and private about what she publicly shares. "We used to share so much in real time, and once we realized that real time can get a little bit scary and tricky, we have saved so much more," she said. "I think we're still really good at sharing. I think we're just really cautious and careful, and I think that's OK."

As they decide how much to divulge about their personal lives, the goal with "The Kardashians" appears to be to reclaim the narrative on their media personas - whether that's about Tristan Thompson and Khloé Kardashian's on-again-off-again relationship, Kourtney Kardashian's romance with Travis Barker or Kim's divorce from Kanye West and blooming relationship with Pete Davidson. So, to what extent, exactly, is "The Kardashians" real, and how much of it is staged? Here's what we know.

Fans, especially on Reddit, have begun noticing continuity errors on the new show, like when Kris Jenner calls her daughters to confirm Travis's proposal to Kourtney on October 17, 2021, and the Caller ID for some of them say 2022. The assumption of fans is that this scene was reshot. A March 2022 Variety interview which states that the cast films individually instead of together to accommodate their busy schedules seems to bolster this assumption.

READ:  Jada Pinkett Smith says she doesn't 'give two craps' what people think of her hair in TikTok video filmed days before Oscars

Are Parts of "The Kardashians" Staged?

The new show kicks off in a similar fashion to "Keeping Up with the Kardashians," with Kim discovering (through her son Saint, no less!) that a game on Roblox is showing an ad for new footage of her infamous sex tape with Ray J. She gets her entire team of lawyers and her estranged husband, Kanye, to quash it. In fact, on the morning of Kim's "Saturday Night Live" performance, Kanye delivers a mysterious briefcase to her, which is filled with old computers that are believed to have the original footage, and he claims that Ray J personally gave him all the original content. Ray J, however, has denied this and said, "All of this is a lie smh – Can't let them do this anymore - so untrue" in a comment on a Hollywood Unlocked post about the events of the episode.

While neither party has explained what Ray J meant, his response sparked a debate about what is actually real in "The Kardashians" and whether they fabricated a storyline to create new drama in a moment when we are privy to so much of their lives. After all, Kim recently admitted to photoshopping Khloé's daughter True into a photo with her daughter Chicago because the original photo with Kylie's daughter Stormi didn't fit her Instagram aesthetic.

There is already a running Reddit thread of all the "KUWTK" and "The Kardashians" plots that fans think are fake across all their programming, including the Roblox scene with Saint, the Todd Kraines prank, Kendall and Kylie being West Coast contributors of Seventeen, and more.

Is "The Kardashians" Scripted?

On "KUWTK," they invited us into their lives, but the cameras were largely ignored. Aside from the confessionals, the fourth wall more or less remained intact between the viewer and the KarJenners. On "The Kardashians," however, they directly speak into the cameras during scenes in a way that evokes simultaneous intimacy and power: they know you're watching and it reminds you that they still control the narrative we see on the screen. We have always watched them live their lives; now in a metacognitive twist, we're watching them filming themselves living their lives.

That shattering of the fourth wall came at moments like when Scott Disick reminisced about how for the "first time in like 15 years... we've had a really, really long break from having cameras following our every move, and I think it got a little lonely." Or when Kim looked into the camera and shared that she's "a vegan most of the time... 98% of the time, but today I'm going wild," as she put chicken wings on her plate. And in episode three, Kim's assistant asked her family to go to her room and when Kris asked if they should bring the cameras, Kim said yes. There's also the moment in the first episode during Kendall Jenner's confessional where she talked about getting COVID and missing the family barbecue, but that it's okay because "you're gonna get me for the rest of the season anyways and I will be here so don't you worry."

READ:  Is Brian Laundrie's Family Lying About His Disappearance? See The Evidence!

So, Is "The Kardashians" Real?

The best answer is yes, mostly.

One of the earliest clips that Hulu shared to tease the new show promises that "All the walls will be shattered." Perhaps this strategic filming and emphasis on certain stories is less about deceiving viewers and more about presenting a simulated version of real events, where the filming doesn't always match the exact time as they are unfolding, whether it's the family BBQ or the Tristan timeline or Travis and Kourtney's relationship.

Regardless of the timing, we can all agree that there's plenty of very real tea being spilled on this show, albeit with some slight curating at times, and I for one can't wait to see Pete Davidson finally make his big appearance.