There’s a theory he reunited with another contestant from his season.

Since his finale, Bachelor Nation members have been wondering if Matt James is dating anyone now after The Bachelor 2021 and his breakup with Rachael Kirkconnell.

Fast forward to Valentine’s Day 2021 when Matt broke up with Rachael after less than a year together, according to Reality Steve. At the “After the Final Rose” special on March 15, Matt confirmed that he and Rachael had broken up due to her racism scandal. “We’re not [together],” Matt told guest host Emmanuel Acho at the time. “It’s heartbreaking. If you don’t understand that something like that is problematic in 2018, there’s a lot of me that you won’t understand. It’s as simple as that…You know what was a long time ago? Plantations.”

If you’re not caught up on Rachael’s controversy, here’s a recap: In January 2021, Rachael came under fire after TikTok user @maddyybierster, a former of high school classmate of Rachael’s, claimed that she was bullied by Rachael for dating Black men. “girlieee, remember when you bullied me in high school for liking black guys???” the user captioned a clip of Rachael on a date with Matt. After the TikTok went viral, the user shared several DMs from other women who claimed to have similar experiences with Rachael when it came to dating Black men.

A TikTok video by @feministmama then went viral in January 2021, where the user exposed Rachael for liking racist social media posts and associating herself with controversial groups. The TikToker shared three social media screenshots that Rachael liked: one of two women in front of a Confederate flag, one of three women dressed in sombreros, ponchos and mustaches, and one of a woman in a “Make America Great Again” hat. Rachael also came under fire at the time after a 2018 photo of her at a plantation-themed party at Georgia College went viral. “As Rachael acknowledged in her apology, there’s a lot of work that needs to be done,” Matt said during the “After the Final Rose” special. “I have to take a step back and allow her to put in that work, and I’m looking forward to seeing her put in that work.”

It’s clear that Matt and Rachael are over, but is he still single after their breakup? Ahead is what we know about if Matt James is dating anyone now after The Bachelor 2021. Heather, a contestant on season 23 of The Bachelor with Colton Underwood, crashed Matt’s season of The Bachelor and professed her love for him. Episode 8 of The Bachelor season 25 saw Heather drive up to the Nemacolin Resort & Spa in Farmington, Pennsylvania, to ask for Chris Harrison. When Chris came out, Heather asked if she could be on Matt’s season. She was then told to quarantine for two weeks before she could meet Matt.

When Heather’s quarantine ended, she crashed one of Matt’s final cocktail parties and asked if she could talk to him. Heather told Matt that her best friend, season 15 Bachelorette Hannah Brown (who is also Matt’s mutual friend), thought they would make a good couple. In the end, though, Matt told Heather that it was too late in the show for her to come and he already had feelings for his other finalists. Heather went on to leave his Bachelor season in tears.

Fast forward to March 2021 and a theory went viral that Matt and Heather are dating after his breakup with Rachael. On March 3, 2021, TikTok user @morganptalks posted a video breaking down the theory: At the time, Matt posted a photo of him on his Instagram Story and tagged himself in San Clemente, California. (Matt lives in New York City, which made fans wonder why he was in California.) Around the same time, Heather also posted a video on her Instagram Story tagged to San Clemente, California. The theory came out after fans discovered that Heather attended Matt’s “Women Tell All” special but was edited out. This led fans to believe that ABC cut out Heather because she and Matt started dating after the show. (There was a similar theory for why Kelley Flanagan wasn’t at Peter Weber’s “Women Tell All” special. Kelley and Peter later confirmed their relationship after his finale.)

So are Heather and Matt dating? That part is unclear, but we find it hard to believe. Matt was likely in California to film the “After the Final Rose” special, which was shot in Los Angeles. It may have been a coincidence that he and Heather were in San Clemente at the same time. Reality Steve also wrote in a post at the time that he didn’t have any evidence that Heather and Matt were together. “There’s a new rumor floating around that Matt has been hanging with Heather Martin,” he wrote. “I haven’t heard anything of the such and don’t believe that is true at all.”

Will Matt James & Rachael Kirkconnell get back together? 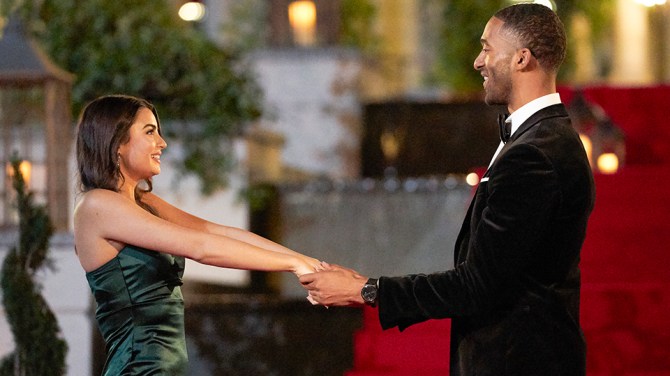 Though Matt and Rachael seemed to be as good as done at the “After the Final Rose” special, fans are still curious if they will get back together. In an Instagram post after the finale, Rachael revealed that she still has feelings for Matt and is “hopeful” that their relationship can work out.

i knew from the first night i met matt that he was something special, and i was praying to share something exceptional between the two of us if that’s what was meant to be,” she captioned a post at the time. “while i never expected this outcome, i respect his decision completely. of course i wish circumstances were different, but i still feel blessed for the time we did have together and the memories we made. i got to fall in love, and i truly believe he was the love of my life. he will always hold a piece of my heart. i’ll always be hopeful and believe what’s meant to be will be.”

Reality Steve, however, confirmed that there’s “no chance” for Matt and Rachael to get back together and that he is indeed single after not reuniting with his runner-ups, Michelle and Bri, either. “Haven’t heard anything in regards to him getting back together with Michelle or Bri, and there’s no chance for a reconciliation with Rachael,” Reality Steve wrote in a post in March 2021.

READ:  Kenan Thompson’s Ex-Wife Is ‘Supportive’ of Him Ahead of Emmys Hosting Gig

In March 2021, The Sun also reported that Matt “blindsided” Rachael with their split and “refuses to speak” with her. “He’s ignored her messages and won’t provide any answers from when he blindsided her with the split,” a source told The Sun, claiming that Matt has “shut her out.” “The breakup came completely out of nowhere. He stood by her throughout the drama until he suddenly chose not to.”

During “After the Final Rose,” Rachael also confirmed that she felt “blindsided” by Matt’s decision to end their relationship. According to The Sun’s source, production “got to Matt” and “ruined” his relationship with Rachael. “He listened to producers who initially supported Rachael but became controlling and more unsupportive of them after Chris Harrison’s interview with Rachel Lindsay,” the source said. “Once the network started getting canceled and not just Rachael, their tone changed. It seems they got in his head and convinced him that his image would be saved if he dumped Rachael. So that’s what he did.” Though we don’t know for sure, all signs seem to point that Matt James is single and isn’t dating anyone after The Bachelor.

The Bachelor is available to stream on Hulu.