On Feb. 7, Christian Shelton and his family sat down to watch Super Bowl LV, but they had a lot more to celebrate than the Tampa Bay Buccaneers’s historic victory. Christian, who’s a second-year vocal performance major at the University of Las Vegas, N… 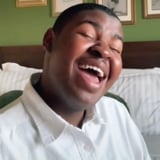 On Feb. 7, Christian Shelton and his family sat down to watch Super Bowl LV, but they had a lot more to celebrate than the Tampa Bay Buccaneers's historic victory. Christian, who's a second-year vocal performance major at the University of Las Vegas, Nevada, performed an emotional rendition of Andra Day's "Rise Up" in an Indeed commercial during the Super Bowl, and his family was beyond proud. "The first time we saw it I was actually asleep," he told POPSUGAR. "It was really, really early in the morning. My dad came and ran into my room and woke me up and was like, 'They posted the ad; it's on YouTube; we can watch it now!' . . . My whole family was really, really excited."

Four days after the ad was posted to YouTube, Christian shared a video of his family watching it together for the first time on Super Bowl Sunday. "When we all first saw it, my mom immediately started crying because she's such a mom, it's such a mom thing," he said. "She cries every single time she watches it . . . They were so, so happy for me and they said, 'This is just the beginning. It can only go up from here,' which is what I'm hoping."

"It's something that I genuinely enjoy doing . . . I can't imagine my life without singing."

Christian, who now specializes in opera, honed in on his passion for singing during his freshman year of high school and began taking vocal lessons in his senior year. Just two years later, an ad agency reached out after seeing his cover of "Rise Up" on TikTok, booking him for the Super Bowl commercial. "It was such a surreal moment . . . For them to think that I was someone they wanted to use for their first ever Super Bowl commercial was really, really huge for me," he said. Due to the pandemic, Christian ended up recording the song himself at home using the equipment he had for his YouTube videos, with the help of producers across the country guiding him via Zoom.

READ:  Twin Flame Steaminess! Machine Gun Kelly & Megan Fox Are Still OBSESSED With Each Other As They Pack On The PDA For His Birthday!

The singer was also recently selected as one of TikTok's Black Trailblazers, and says he hopes to see more Black artists and influencers spotlighted for their talent. In making that change, Christian hopes to see the alogrithms across social media platforms improve to properly credit Black artists who are often the original source of trends across the internet. Since the commercial aired, Christian has been offered other singing opportunities, but he says his ideal musical collaboration would be with Beyoncé, who inspires him through her cross-genre experimentation.

In addition to the overwhelming support from his family, friends, and followers, Christian says he's grateful for the opportunity to sing anytime and anywhere. "It's something that I genuinely enjoy doing . . . I can't imagine my life without singing. And I think that is a main source of joy because you can do it anytime, anywhere, at any volume. You don't have to be always singing so loud, you can just sing to yourself or even sing in your head, and I think that's why I love it so much." Check out his original performance of "Rise Up" and some of his best TikTok covers here.

Related:
Please Enjoy This Star-Studded Post-Super Bowl Concert You Might Have Missed