Kourtney also jokes about her sister’s quickie marriage to Lamar Odom during the chat.
Khloe and Kourtney Kardashian got extremely candid about their sex education and freezing their eggs in a new interview for “Modern Family” st… 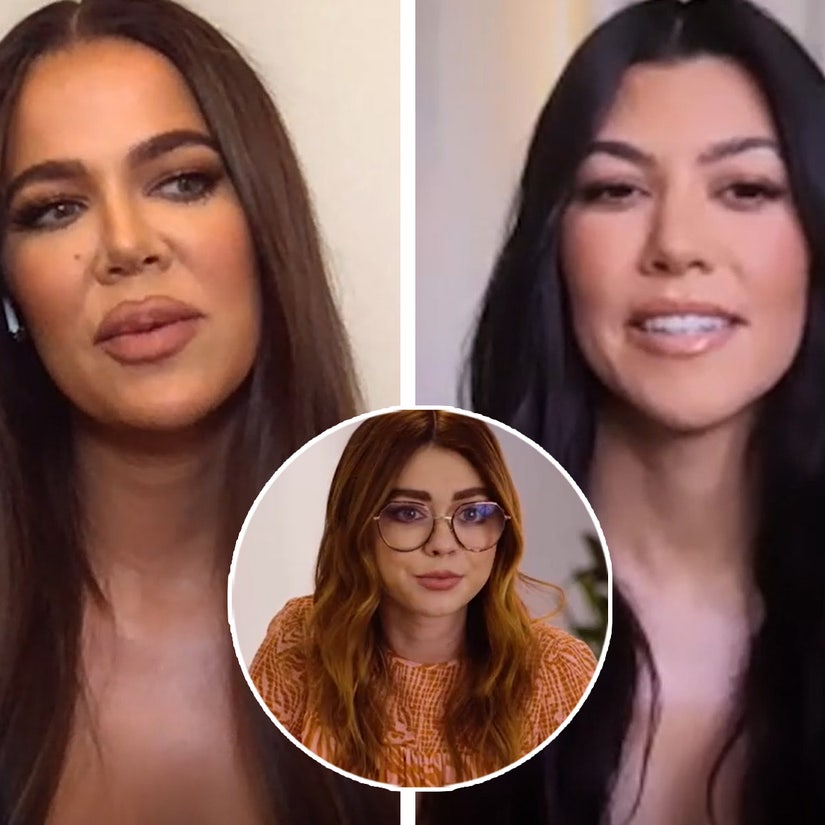 Kourtney also jokes about her sister's quickie marriage to Lamar Odom during the chat.

Khloe and Kourtney Kardashian got extremely candid about their sex education and freezing their eggs in a new interview for "Modern Family" star Sarah Hyland's virtual Lady Parts series.

The trio were joined by OG/GYN Dr. Sherry Ross for the discussion, where Khloe opened up about her plans to have another child with Tristan Thompson and how that plan has shifted a bit thanks to the ongoing Covid pandemic.

"I actually have done IVF about three different times. I froze my eggs once already and when I was ready to make embryos with Tristan ... freezing your eggs is of course a great insurance policy, if you will," she explained. "You know they're there. I had about 12, 14 eggs and I defrosted them all to mix with sperm and none of them survived."

She added that going through the fertility process is "much more challenging during Covid," joking that, "If you wanna make God laugh, tell him your plans."

"So the one time I'm actually really trying to plan, God is saying, 'Uh uh, you can't make your plans like this!' she continued. "My plan was to have kids closer in age. But now with Covid and everything, my plan's been a little delayed. I definitely do want more kids. I have so many brothers and sisters. I think it's such a blessing — especially during these times — to have a family member or people that you can play with and rely on and just have a buddy through life."

During the conversation, Kourtney revealed she too froze her eggs, after getting "talked into it" by her family. "Since everyone else is doing it, I might as well," she added, saying she was 39 at the time.

"I think it gave me a feeling of taking a deep breath. I was 39, about to turn 40 and everyone was like, if you're gonna do it, you gotta do it now," she explained. "Stop rushing me, I don't know if I want to have another kid or if it's in the future. Having the control over my body, it just gave me peace of mind."

Khloe explained that making embryos gave her that same sense of relief.

"I feel like once I had True, everyone was pressuring me to have another kid and my circumstances were a little different, I was like I don't know if I want to have other kids right now," she said. "For me, I'm such an over-thinker and planner, what happens if I die, I'm leaving these kids alone, who's going to take care of them?"

When Kourtney volunteered, Khloe joked that idea "scares" her too. "They're not going to be on a schedule if you take care of them!" she exclaimed.

Khloe did undergo fertility treatments while she was married to Lamar Odom, but admitted on a 2017 episode of "Keeping Up with the Kardashians" she only "fake-tried" to get pregnant at the time. Speaking with Hyland, she said that she "really wanted to enjoy being married for a minute and I was 24. In hindsight, i was like, I can't even believe I was married at 24."

READ:  King Von's Uncle Says Fans Are Gunning For Quando Rondo: It's Ugly For Him!!

"After 9 days of knowing someone," added Kourtney. "No, no, no," Khloe shot back, "I got married after 9 days of being engaged. I knew him for 30 days, alright. Get it right. There's a difference."

The two Kardashians also revealed how their parents first talked to them about sex.

"I remember my mom talking to me about sex, but I also had the blessing of having two older sisters," said Khloe, who admitted those initial conversations made it clear there wasn't much focus on it being a pleasurable experience.

Khloe said she started taking birth control when she was around 14 or 15, adding that she believes she had it easier because of her older sisters. "When you're the third child, you've already heard it all," she explained.

"I was so afraid of getting pregnant, my parents scared the shit out of me," she added. "I had to look at all these visuals, if I had sex, this is what's going to happen to me. I was so afraid."

Khloe added that she felt "a lot safer" after starting birth control.