Their real-life relationship may be even cuter than what’s on TV.

If you’re one of the show’s tens of millions of fans, you may want to know if Joe Locke and Kit Connor from Heartstopper are dating in real life after making viewers across the world swoon as Charlie and Nick.

Heartstopper, which premiered on Netflix on April 22, 2022, is based on Alice Oseman’s 2020 graphic novel of the same name, which tells the love story of Charles “Charlie” Spring (Joe Locke), a shy gay student at Truham Grammar School who was recently outed, and Nicholas “Nick” Nelson (Kit Connor), a popular rugby player a year older than Charlie, who sits next to him in class one morning. The show, which has been viewed more than 24 million times since its premiere, follows Charlie and Nick’s relationship, from the start of their intimate friendship to Charlie’s crush on Nick and Nick’s struggles with his own sexuality and feelings for Charlie.

In an interview with GQ in May 2022, Joe opened up about how he relates to Charlie’s experience of coming out. “I really relate to Charlie and his experiences a lot too,” he said. “There are a lot of stories about coming out, but there are not as many stories about the actual queer experience post-coming out and how just because you’re out, doesn’t mean everything is magically better. Charlie’s experience with settling for a love that isn’t necessarily what he deserves is pretty universal for queer people. I think there are a lot of queer people who just accept what they get because they’ve told themselves they don’t deserve better. Heartstopper is so great at being like, ‘Queer people deserve real love. Queer people deserve a love that actually is fulfilling.’ Heartstopper is a real celebration of queer love.”

Joe and Kit, who are both 18 years old, also told Them about how being close in age to their characters (Charlie is 15, while Nick is 16) helped them relate to Charlie and Nick. “I think it makes it more authentic because there’s a time and place for 35-year-olds playing 16-year-olds, you know.,” Joe said. “But Heartstopper is definitely a story that hasn’t been told before and so it should be told with the most authenticity as possible. I mean, me and Kit are still in school. We have our A Levels like three weeks after the show comes out. You couldn’t get anymore in school than that!” Kit added, “A really, really important aspect of it is how it plays out in school, and how it works in that environment. The fact that Joe and I both are still in school made it, to be honest, a little bit easier as actors because we didn’t have to think back and remember what it was like. We’re not thirty-year-olds playing teenagers; it’s very much our mindset now. School can be a very strange environment because it does feel like your whole life is just in school, in these friendship groups.”

READ:  The Devil Made Them Do It: All the Classic Horror Movies Referenced in The Conjuring 3

Are Joe Locke and Kit Connor dating from Heartstopper? 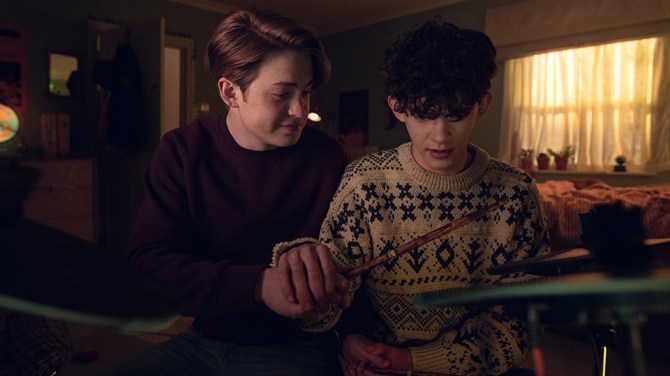 Are Joe Locke and Kit Connor dating from Heartstopper? The answer is no. In an interview with Digital Spy in May 2022, Kit confirmed that he and Joe are “very good friends,” which helped when they had to perform intimate scenes as Nick and Charlie. “We’re very good friends, me and Joe. We’re very close. So that helps,” Kit said. “But it’s so invaluable to have an intimacy coordinator right there, sort of giving you that extra blanket. A comfort blanket, he says. Just to give us that extra kind of protection and comfort and general safety.” He continued, “Because there is always a strange element of doing any kind of intimacy scene. You’re sitting in a room, and you might be kissing someone in front of 20 other people in a room. There’s something a bit strange about that. So it’s nice to have someone— everyone’s obviously got our back in that room. But it’s nice to have someone who really is there to make sure that we feel 100 percent fine and safe and comfortable.”

Kit also confirmed that he and Joe are just friends in an interview with Untitled Magazine in May 2022, which helped their performances as Nick and Charlie. “Joe and I are very close, we are comfortable at a point in our relationship where we can take the mick out of each other, that’s the main element of our friendship,” he said. “We just have fun; we feel very at ease with each other. When you spend so much time together on set – most of my scenes were with Joe—it did mean we very quickly got on together. It was a good thing that it did happen as it would’ve been very difficult to portray that relationship if we weren’t as close as we are.”

In an interview with Entertainment Weekly in May 2022, Kit revealed that the on-screen connection between him and Joe was immediate in their chemistry read. “It was so helpful because it did give us all a few hours to get to know each other and befriend one another,” Kit said. “By the time we were filming and rehearsing it was like, at least we knew each other. I think immediately the team could see some chemistry between the whole cast.” Joe added, “I did a chemistry read with two different Nicks,” to which Kit responded, “And I did one with two different Charlies. It was very confusing at different times. But we found one another, Joe and I, we found one another.”

READ:  iCarly’s Jennette McCurdy Is ‘Ashamed’ of Her Past Acting Work

Kit and Joe also recalled their first time meeting each other in an interview with Them in May 2022. “It was instant. What can we say? It was an immediate connection that we shared,” Kit said. “One of the best decisions about the schedule of how we filmed Heartstopper was that it was quite chronological. In a sense, as these characters got to know each other, we as actors and as people also got to know each other. That doesn’t just work for Nick and Charlie, but for the whole cast, really. We slowly but surely actually started to like each other. Joe and I are really good friends and it’s always a pleasure to share the screen with him.” Joe added, “We’ve gotten to that point in our friendship where you’re allowed to be mean to each other. There was a day on set where our director was like, ‘Guys, I’m getting more Kit and Joe than I am Nick and Charlie.'”

Kit also confirmed that his and Joe’s relationship isn’t as “flirty, cute and nice” as Charlie and Nick’s, which was something they had to “adjust to” when playing their Heartstopper characters. “The way that me and Joe will banter with each other is very much taking the mick out of each other, and that’s not really how Nick and Charlie joke with each other. It’s very sweet, and kind of flirty, cute and nice,” he said. “That was something that we sort of had to adjust to, when we switched on our Nick and Charlie.”

Joe also told GQ in May 2022 about how playing Charlie has changed how he views love. “Overall, I’ve learned to appreciate the people in my life a lot more through playing Charlie,” he said. “Charlie is just the most loving person, and I fear that in the relationships in my life, I’ve not always been that. I always try and take that on now and become more like Charlie. He’s just nice and I want the people in my life to think that about me too.” He continued, “I don’t know how Alice writes about love and relationships so well, but she has this amazing ability to encapsulate the queer teen experience. It also helps that we’re all still teenagers, so we’re acting these feelings that feel really real and recent for all of us. She writes about growing up and falling in love for the first time like no one else, which is especially impressive considering she’s not a teenager anymore. I think it’s hard to remember the intensity of those emotions once you grow up.”

READ:  Aaron Rodgers' dating history: Everything we know about his past girlfriends

He also told GQ about how he can relate to how important social media was to Charlie and Nick’s relationship. “Well, so many of my generation’s interactions happen on social media,” he said. “I think there are some messages that Charlie sends in the show that he would never be able to actually say to someone in real life. I think that part of the script is such a realistic view of youth today. I think a lot of people say things like, ;Oh, young people today can’t actually talk to each other.’ They’re probably right! Also, our generation can say a lot of horrible things to people online. Online is how we communicate.”

He continued, “I think that for me, especially, social media has been a great thing in learning about the world and learning about different people and what is out there [other than] what I see with my eyes in my day-to-day life. But it also comes with the idea of comparing yourself to other people. And I think everyone falls victim to that a bit.”

Heartstopper is available to stream on Netflix. 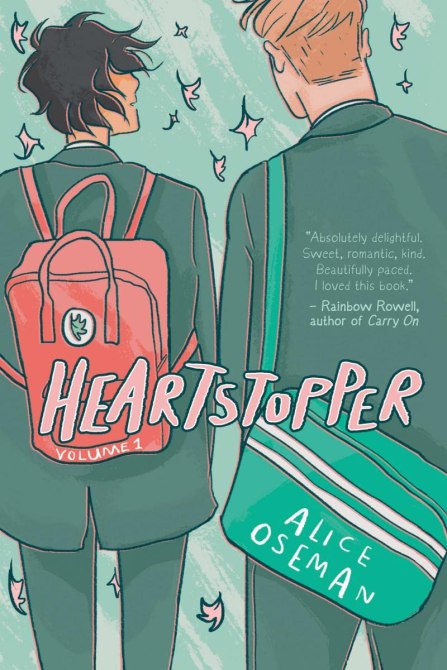 For more about Heartstopper, read Alice Oseman’s 2020 graphic novel that inspired the series. The New York Times bestselling book, which features two-color artwork and was the American Booksellers’ Association’s Next Indie Pick of 2020, tells the full love story between Charlie Spring, a shy and softhearted student at Truham Grammar School who was recently outed, and Nick Nelson, a popular rugby player a year older than Charlie, who sits next to him in class one morning. The book follows Charlie and Nick’s relationship, from the start of their intimate friendship to Charlie’s crush on Nick and doubt that he even has a chance. The book also explores Nick’s struggles with his own sexuality and feelings for Charlie, as well as the ups and downs of high school and the innocence of first love.