It’s official: Dr. Jackson Avery is out at Grey Sloan Memorial Hospital. If you’re one of the many fans wondering, “Why did Jackson leave Grey’s Anatomy?” just know, you’re not alone.

Jesse Williams, who’s played Jackson since season 6 of Grey’s Anatomy, confirmed on May 6 that he was exiting the series after 12 seasons. His last episode, titled “Tradition,” airs on May 20.

“I will forever be grateful for the boundless opportunities provided me by Shonda, the network, studio, fellow cast mates, our incredible crew, Krista, Ellen and Debbie,” Williams told Variety in a statement. “As an actor, director and person, I have been obscenely lucky to learn so much from so many and I thank our beautiful fans, who breathe so much energy and appreciation into our shared worlds. The experience and endurance born of creating nearly 300 hours of leading global television is a gift I’ll carry always. I am immensely proud of our work, our impact and to be moving forward with so many tools, opportunities, allies and dear friends.”

Krista Vernoff, Grey’s Anatomy‘s showrunner, also confirmed to Variety that Williams had decided to retire as Jackson. “Jesse Williams is an extraordinary artist and activist,” Vernoff said. “Watching his evolution these past 11 years both on screen and off has been a true gift. Jesse brings so much heart, such depth of care, and so much intelligence to his work. We will miss Jesse terribly and we will miss Jackson Avery — played to perfection for so many years.” 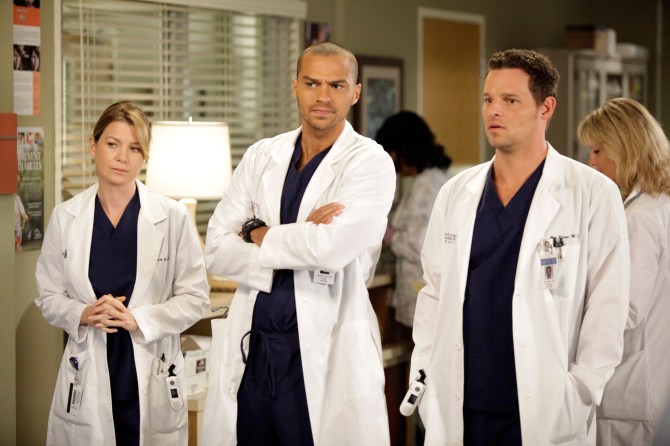 Why did Jackson leave Grey’s Anatomy?

As Grey’s Anatomy fans know, the show has been building a reunion between Jackson and ex-wife, April Kepner, since season 17 episode 14, where Jackson asks April to move with him to Boston with their daughter, Harriet. Initially hesitant, April agrees and tells Jackson that she and her husband, Matthew Taylor, have decided to separate, which means that she and Jackson are both single. So Jackson and April’s romance may be how he’s written but, but why did Williams decide to leave in the first place?

According to Deadline, Williams signed a two-year deal with ABC in 2019, which means season 17 would’ve been his last season anyways if he didn’t resign his contract. Further, Deadline reported that Williams’ contract involved “scaled back duties” for season 16 and season 17 due Williams’ preparing for his Broadway debut in the revival of Take Me Out. The play was original scheduled to start on April 2, 2020, but has since been delayed to early 2022.

The most recent two-year deal Williams signed for Grey’s Anatomy in 2019 involved scaled back duties for him as he was preparing to make his Broadway debut in the revival of Richard Greenberg’s Take Me Out, which was originally slated to begin performances April 2, 2020. Delayed by the pandemic, it will now likely open in early 2022.

Williams is also cast in Amazon’s upcoming movie, Marked Man, which hints that he may have left Grey’s Anatomy for other job opportunities. Along with his on-screen work, Williams has also executive produced projects such as Random Acts of Violence, The Burial of Kojo, and documentaries Stay Woke: The Black Lives Matter Movement, With Drawn Arms and Survivors Guide to Prison, so it’s clear has a lot going or him outside of Grey’s Anatomy. Williams also shared screenshots of Deadline’s article on his Instagram after announcing his exit, which also hinted that he may have left for opportunities outside of Grey’s Anatomy. Grey’s Anatomy airs Thursdays at 9 p.m. on ABC. Here’s how to watch it for free.