The documentary also includes personal moments between Justin and his wife, Hailey.

If you’re a Belieber, you may want to know how to watch “Justin Bieber: Our World” online for free to see the “Stay” singer’s first full concert in three years.

“Justin Bieber: Our World” is a documentary that follows Bieber as he prepares for his New Year’s Eve 2020 concert, which was live streamed to millions across the world. “Performing live and connecting with my fans through music is deeply meaningful to me,” Bieber told Deadline. “Especially during the past year, being able to provide a service and share my gifts to bring some happiness to people during such a sad and scary time has meant the world to me. This film documents an intense and exciting time, preparing for a return to the stage during this season of real uncertainty. Coming together with my team, overcoming the obstacles, and delivering a special show, surrounded by friends and family; it’s all here.”

In an interview with People, Bieber revealed that he “definitely” had nerves before his first full concert in three years. “I definitely felt the nerves leading up to it,” he said. “I think sometimes nerves are coming from a good place, because you care.” In a clip from the documentary, Bieber opened up about what he’s learned from his past mistakes. “There’s a lot of moments that I messed up. But I think being okay with your little mistakes… I mean, nothing’s going to be perfect,” he said. “So next time, you just take those mistakes and you do it better. That’s life. You want to get better at something, you gotta be willing to make mistakes. I heard this saying like, ‘You miss all the shots you don’t take.’ So you take the shot. If you miss, you miss, but at least you tried.”

Director Michael D. Ratner called the documentary—which also includes intimate moments with Bieber and his wife, Hailey Baldwin—a “feel-good film.” “I couldn’t be prouder of our continued partnership with Justin as well as the SB Films team and the collaborative effort by all to make this project possible. Amazon Studios is the ideal partner to share this inspiring and feel-good film on a global scale. Make sure to watch it with the volume maxed out,” Ratner said. 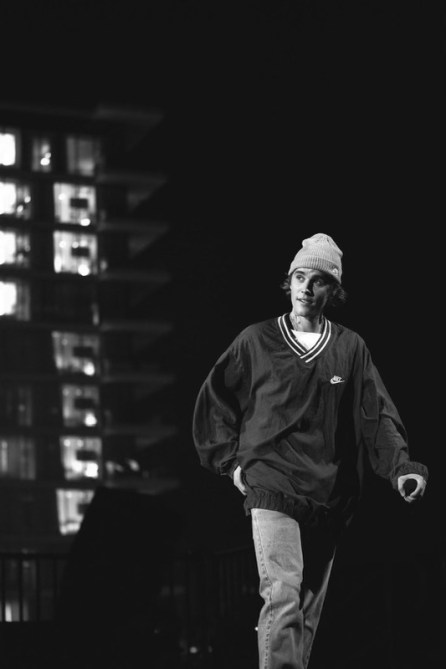 What is “Justin Bieber: Our World” about?

“Justin Bieber: Our World” is a 94-minute documentary that follow Bieber in the month leading up to his live-streamed New Year’s Eve 2020 concert at the Beverly Hilton Hotel. The show, which invited 240 guests with millions across the world watching online, was Bieber’s first full concert in three years since he announced his hiatus from music in 2019. “Justin Bieber: Our World” was produced and directed by Michael D. Ratner (who also produced Bieber’s 2020 YouTube docueries Justin Bieber: Seasons). The documentary also includes personal and self-shot moments between Bieber and his wife, Hailey Baldwin.

When does “Justin Bieber: Our World” come out?

“Justin Bieber: Our World” is available to stream on Amazon Prime Video on Friday, October 8, 2021.

How to watch “Justin Bieber: Our World” online for free

Below are step-by-step instructions for how to sign up for Amazon Prime Video’s free trial.

READ:  Dr. Dre's home targeted in burglary attempt a day after he was hospitalised

Prime Student is Amazon Prime for students, and includes the same benefits as Prime memberships. Those benefits include Prime Delivery (which includes free one-day delivery, free same-day delivery and free two-hour grocery delivery), as well as free Prime Reading, Prime Music and Prime Video accounts. Prime Student also includes other benefits like two free months of Kindle Unlimited, 99 cents per month for Amazon Music Unlimited, as well as 99-cent-per-month subscriptions to Prime Video channels like Showtime, Lifetime, Shudder and History. Other benefits include free food delivery with Grubhub+, up to 10 percent off of flights and hotels with Student Universe, one free month of Course Hero, a homework help service, and three free months of Calm, a meditation app.

Below are step-by-step instructions for how to sign up for Prime Student’s free trial.