The title of Jill Gutowitz’s debut book feels less like a title and more like an observation: “Girls Can Kiss Now.” I was in college when same-sex marriage was legalized in the United States – a year after I came out as bisexual – and it’s hard for me… 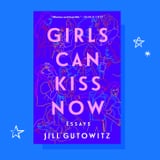 The title of Jill Gutowitz's debut book feels less like a title and more like an observation: "Girls Can Kiss Now." I was in college when same-sex marriage was legalized in the United States - a year after I came out as bisexual - and it's hard for me to imagine a time when girls couldn't kiss. That's exactly what Gutowitz is trying to figure out at the heart of "Girls Can Kiss Now" ($17): what caused such a clear shift in how the pop culture zeitgeist talks about queerness, and when did it happen?

Gutowitz doesn't have to dig far into her past to find her own queer beginnings in the '90s and early 2000s. In her (hilariously titled) chapter "One Day, You'll All Be Gay," Gutowitz outlines what it was like to watch movies in the early aughts, including analyzing "Bring It On." In the film, Rancho Carne Toros cheerleader Courtney calls Missy an "uber dyke," and even though it's a small line in the middle of a relatively great movie, the flippancy of the insult is exactly why it's so hard for Gutowitz to rewatch. Cheerleader captain Torrance reprimands Courtney, but only to reinforce how good Missy is at tumbling, mentioning nothing about her use of the word "dyke" as an insult. "Being a mean girl was worthy of reprimand," Gutowitz writes, "but being homophobic was assumed." So what's changed in the last 22 years?

"I think for a lot of [queer] people, things are objectively easier now," Gutowitz tells me in a phone interview. "There's more visible queerness and more positive representation for queerness in media that naturally normalizes it for a lot of people. Kids and teens have a lot more examples - even just celebrities, music, movies, comic books . . . truly everything has been queered a little bit. But I also think there's this assumption that things are better, full stop, for everyone. And I don't think that's true."

"Girls Can Kiss Now" came out on March 8, just 20 days before Florida Governor Ron DeSantis signed the controversial "Don't Say Gay" bill in an effort to stifle discussion of sexual orientation in the classroom. Additionally, nearly 240 anti-LGBTQ+ bills have been filed so far in 2022. While reading this book, I felt both elation for how far we've come culturally . . . and sadness and fear for how that progress is being threatened on a statewide and national level. I see queer representation in my favorite shows like "Euphoria" and in shows I used to watch, like the last season of "Arthur" featuring a gay wedding. But I also remember watching Kurt Hummel tearfully come out to his dad on "Glee" in 2009 and later watching Kurt's bully, David Karofsky, attempt to kill himself because of his queerness in a later season. When I ask Gutowitz what she wants to see in terms of queer representation on television now, she's hesitant to dismiss coming-out storylines. "I don't want queer people to be pigeonholed in movies and TV shows into this one sad story about coming out and hating yourself," she says. "But I also think to limit that and the kinds of stories that queer people are allowed to share and talk about just truly does a disservice to all the people across the country who are suffering with these kinds of things. We're not past it."

What Gutowitz really wants to see, she tells me, is for queer people to get the same treatment as their straight onscreen counterparts: being real, confused, and messy humans. "I think a great example is Rue or Jules from 'Euphoria' - both of them make bad choices, and they're not super likable all the time. But they feel very real."

READ:  Sex Positions So Acrobatic, You’ll Be Shocked People Even Attempt Them

Aside from digging into pop culture - including analyzing the fan theory of whether or not Taylor Swift is secretly queer - Gutowitz takes readers through her own coming-out journey, which felt very real and relatable to my own story, right down to having to break up with your first girlfriend a dozen times before it really sticks. Both Gutowitz and myself came out as queer in our early 20s, and she noticed having those intense feelings she should have had in high school rearing up a decade later: "A part of my gay experience is this kind of delayed adolescence, where I didn't really know I was gay until I was 22 or 23, and then I was starting to get comfortable with it when I was 23 or 24, and I felt like a teenager." In the chapter "Crush Me at the Forum," Gutowitz details an intensely emotional run-in with an ex at a concert, which feels so achingly human and relatable, right down to crying in her car on the drive back to her parents' house.

Gutowitz strikes a delicate balance with this collection: writing funny, analytical essays about queerness in pop culture while also detailing her own experiences around her sexuality. She has a knack for writing about the cruelty queer people faced in the early 2000s in an engaging, insightful way - detailing the hate that celebrities like Lance Bass, Lindsay Lohan, Neil Patrick Harris, and Fifth Harmony member Lauren Jauregui faced after being forcefully outed by Perez Hilton. I felt like I was reading a queer pop culture history text for the first time. Suddenly, I had a full timeline of my own community's place in pop culture, mixed in with my favorite part of the book, what Gutowitz calls "the current lesbian canon," or things that aren't officially gay but seem gay, from oat milk to Beth Harmon from "The Queen's Gambit" to the Golden Gate Bridge.

Ultimately, Gutowitz shares, she hopes that "Girls Can Kiss Now" can serve as a guide for people trying to break out of toxic stereotypes instilled by the cultural messages from the '90s and 2000s. "[This book is] my own coming-of-age and love story," she says. "I want queer people to fall in love and fight the toxic things that we've been taught by media for so long and continue to have our own coming-of-age and grow out of all the shame and toxicity. Leave it behind, and start building positive futures for ourselves."