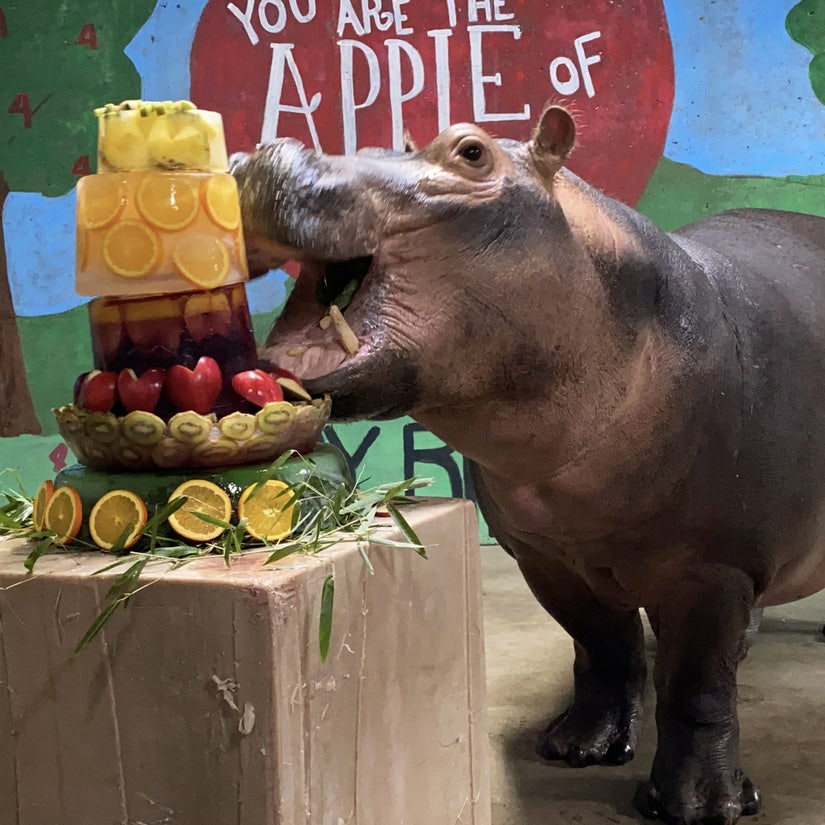 Not only did the young hippopotamus get a sweet treat, but the Cincinnati Zoo hosted a special event for their most famous resident and her fans across the country.

Over the weekend, the adorable hippo and viral sensation celebrated her 4th birthday at the Cincinnati Zoo and Botanical Garden. Fiona -- who was born six weeks premature on January 24, 2017 -- was honored on her special day and received a colorful birthday cake, filled with her "favorite" frozen fruits.

Not only did the young hippopotamus get a sweet treat, but the Cincinnati Zoo hosted a special event for their most famous resident and her fans across the country.

The live-streamed virtual fundraiser, "Float4Fiona," included a "slow-paced race" in which thousands of numbered apples, which were purchased by fans, floated and bobbed through Hippo Cove to the finish line. The owner of the winner apple received the ultimate prize: a trip to meet Fiona herself!

The city of Cincinnati got involved in the celebrations as well, with many businesses creating exclusive goodies in honor of Fiona's big day. Graeter's Ice Cream made their own ice cream flavor for Fiona, Chunky Chunky Hippo, while Coffee Emporium created a special blend for Fiona as well as her own Fiona Mocha drink. Cincy Shirts also designed t-shirts to coincide with the virtual event's theme of apples, creating a t-shirt that read "Hip to the core."

Cincinnati Zoo also shared several posts on Twitter for Fiona's 4th birthday, including an adorable video of Fiona devouring her birthday cake. According to the zoo, Fiona also shared the cake with her mom, Bibi.

READ:  Andy Cohen’s Friendships With Ex Housewives: Who Is He on Good Terms With?

The zoo also took a look back at Fiona's past birthdays and shared a video of some of their favorite moments from the last four years.

See the sweet posts, below!

Happy 4th birthday Fiona! Her care team made her this special cake full of her favorite frozen fruits! The birthday girl even shared with her mom Bibi! Fiona is the smallest hippo to ever survive! #TeamFiona pic.twitter.com/o9soAABAl2

Fiona always celebrates in style! Here's a look back at all of her birthdays! #TeamFiona pic.twitter.com/Fq2i5QRBLS

It may be too cold for the birthday girl to go outside, but she still watched the Float4Fiona virtual fundraiser from inside! 🤩🦛🥳🍎 https://t.co/55XJftjzdq pic.twitter.com/yDJUleA0wE

A few of our favorite moments from the last four years of Fiona! What is your favorite Fiona memory? #TeamFiona pic.twitter.com/D2hjG8JQxs