If you’re curious about what Rob Kardashian is up to now, you’re not alone. The sole brother to some of the most famous sisters… 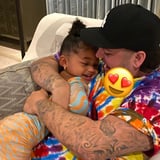 If you're curious about what Rob Kardashian is up to now, you're not alone. The sole brother to some of the most famous sisters on the planet, Rob was heavily featured on Keeping Up With the Kardashians up until season seven, when he decided to step off the show for a while. Since then, Rob has only appeared on the reality show a couple times a season, keeping his private life with his daughter Dream off cameras. In light of the new season - Rob is expected to make little to no appearances - we wanted to check in on what the star is up to now, and what we can expect from him in the future.

Rob retreated from the limelight around 2012, continuing to step away from fame as he encountered more and more difficulties with his ex, Blac Chyna. Rob and Chyna started dating in early 2016. Their relationship became increasingly more high-profile, and they got engaged after less than three months together. The couple welcomed daughter Dream in November of 2016, but split up in 2017 amidst rumors of infidelity. The public breakup turned ugly and culminated with Chyna filing suit against the Kardashian family.

Today, Rob is actively coparenting 4-year-old Dream with Chyna, while seeking primary custody. Since Keeping Up With the Kardashians' 18th season, Rob has begun to make small appearances again on the show, and has recently undergone a total physical transformation. After being diagnosed with Type 2 diabetes in 2015, the reality star has been focusing on living a healthier lifestyle. Rob reportedly revamped his workouts in 2019 with his sisters Kim, Kourtney and Khloe, and today mainly focuses on caring for his daughter Dream and exercising. As mother Kris Jenner told iHeart Radio's podcast Pretty Messed Up, Rob is "so in love" with Dream, following it up with, "he's such a great dad and you never know - you have kids, they grow up, they have their kids - and you just don't know how somebody is going to be as a parent but he's just . . . wow."

Rob's Instagram account is currently run by Jenner Communications. The photos mostly feature Rob's daughter and nieces along with his brand collaboration posts. Rob seems to be living a calm, centered life nowadays - and we're definitely here for it.