Image Source: YouTube user Netflix
The second season of Bridgerton introduces a brand-new set of characters to the Ton, but the one we’re most excited to meet is Kate Sharma! As the show’s newest leading lady, she’s a complex character who we already … 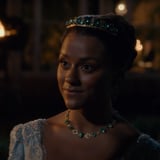 The second season of Bridgerton introduces a brand-new set of characters to the Ton, but the one we're most excited to meet is Kate Sharma! As the show's newest leading lady, she's a complex character who we already know we'll fall in love with. So whether you've read the Bridgerton books and know what to expect or you're completely in the dark, here's a primer on what to know about Kate.

Is Kate Sharma in the Bridgerton Books?

Yes, Kate Sheffield (who Kate Sharma is based on) is one of the romantic leads in The Viscount Who Loved Me, the second Bridgerton book by Julia Quinn and the basis for the upcoming second season of the TV adaptation. After years of notable bachelorhood and gaining himself a reputation as an utter rake, Anthony Bridgerton decides it's finally time to get married and ensure the succession. He searches for a "suitable" wife who is beautiful, intelligent, accomplished, and of the appropriate social rank. The only other requirement he has is that it absolutely must not be a love match, as he outright refuses to fall in love.

Anthony's choice is Edwina Sheffield, the "diamond" of the season who seems to fit every one of his requirements. Unfortunately for Anthony, Edwina has an older stepsister, Kate, who is dedicated to warding off fortune hunters and ensuring Edwina achieves a good match. Kate is older than Edwina and still unmarried, but her focus is on Edwina's future, not her own. Edwina, for her part, has vowed not to marry without Kate's approval - and Kate very much does not approve of Anthony.

READ:  Colin Kaepernick Wants to Join the NFL Again—He’s Willing to Be a ‘Backup’ For the ‘Opportunity’

Any romance fan can tell you where this is going next, but it's so fun to get there. As Anthony keeps pursuing Edwina (and trying to convince Kate to give her blessing), he and Kate also wind up spending more time together. Kate is witty, unafraid to speak her mind, and a loyal and protective sister who never misses a chance to needle Anthony. Still, over time, she develops feelings for him, rakish reputation and all.

Who Is Kate Sharma in the Bridgerton TV Show?

For the TV adaptation, Kate and Edwina's last name is changed from "Sheffield" to "Sharma," reflecting the casting of British Indian actors Simone Ashley (as Kate) and Charithra Chandran (as Edwina). Quinn told Insider that writers of Indian descent worked on the Sharma family's story to make it as authentic as possible within the heightened Bridgerton world. "They were able to bring to it authenticity and elements of their own stories that I myself would not have been able to do as well. I'm very grateful that they're able to take the story and expand it in that way."

However, from early press releases, it certainly seems like this Kate is every bit the feisty, witty heroine we already know and love from the books. "Newly arrived in London, Kate is a smart, headstrong young woman who suffers no fools - Anthony Bridgerton very much included," the official Netflix character description reads. In the season's first sneak peek, revealed at the Netflix TUDUM event, Kate has no problem telling Anthony exactly what she thinks of him, leaving him speechless.

READ:  Gal Gadot Has a Massive Net Worth Thanks to These Superhero-Sized Paychecks

Who Plays Kate Sharma in Bridgerton?

Simone Ashley will step into Kate's (sparkly) shoes for the new season of Bridgerton. You probably recognize her from her role as Olivia on the comedy Sex Education, or you might have spotted her in a minor role in Detective Pikachu. Bridgerton will be her first full-fledged leading role, and we can't wait to see her take on this iconic romance heroine!