Image Source: Everett Collection
It’s finally time for Ghostbusters fans from all generations to grab their proton packs, set their ghost traps, and put on a classic beige jumpsuit because Ghostbusters: Afterlife flew into theaters on Nov. 19! The sci-… 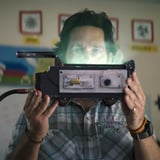 It's finally time for Ghostbusters fans from all generations to grab their proton packs, set their ghost traps, and put on a classic beige jumpsuit because Ghostbusters: Afterlife flew into theaters on Nov. 19! The sci-fi fantasy comedy is the fourth movie in the franchise, but Afterlife arrives as a direct sequel and homage to the original Ghostbusters (1984) and Ghostbusters II (1989). Although it's set in the present day, Afterlife contains so much '80s nostalgia. Director Jason Reitman, son of the original director Ivan Reitman, continues the franchise and his father's legacy by picking up where he left off and mixing the old cast with the new.

Afterlife follows Dr. Egon Spengler from the original Ghostbusters' daughter and grandchildren, Callie, Trevor, and Phoebe Spengler (Carrie Coon, Finn Wolfhard, and McKenna Grace). Egon left the Spenglers (who have no money) his old farmhouse in Summerville, Oklahoma, which gives them a chance to start new lives. Not only do Trevor and Phoebe realize their grandfather was a Ghostbuster, but after uncovering his rusty equipment and the mysterious secrets of the town where he spent his last years, Trevor, Phoebe, and their new friends must band together to save the world from an old and powerful enemy - you guessed it, more ghosts! You don't need to know the entire backstory behind the original movies to understand the ending of Afterlife, but fans could still leave the theater with haunting questions, so if you ain't afraid of no ghost, let's break - or bust - that ending down!

READ:  Every Single Straw Bag Worth Shopping This Season

Why Did Egon Spengler Desert the Ghostbusters and His Family?

Throughout the movie, we learn through Callie's backstory that Egon abandoned her when she was young and left his friends, family, and coworkers (aka the Ghostbusters) behind to move to the middle of nowhere. Callie and the people of Summerville all assumed he had mental health illness. When Phoebe spends a few hours in jail with Trevor and Podcast (Logan Kim) for wrecking the town with proton blasts while ghost hunting, she calls the old Ghostbusters helpline, and Ray Santz (Dan Akroyd) answers the phone. Ray tells Phoebe that after the Ghostbusters saw less and less clientele over the years, Egon betrayed his friends by stealing most of their equipment, taking off, and preaching about the end of the world, but Phoebe soon learns that isn't the whole story.

While ghosts continue to cause trouble in Summerville, the kids discover a pit of angry spirits deep in the town's abandoned mining complex kept at bay by a system of proton packs. Not only did the proton packs explain the mysterious earthquakes the town has been experiencing recently, but Phoebe quickly realizes her grandfather sacrificed everything to move to Summerville and stop another major ghost apocalypse, just like the last one that wreaked havoc on New York City in 1984.

Who is Ivo Shandor and Gozer?

That apocalypse Egon was trying to stop before he died is a direct plot continuation of the original Ghostbusters movie. In the 1984 film, the villain is Ivo Shandor, the leader of a cult that worships Gozer the Gozerian (the shape-shifting god of destruction). Since then, he's built a temple underneath Summerville (where that pit of angry ghosts is) to summon Gozer with all her ghosties and bring about the apocalypse once again. Shandor dies before he can finish the job (his body now lies in a glass coffin), but the end of the world is still predicted for 2021 on the temple wall.

READ:  All the Christmas Movies Starring ‘One Tree Hill’ Alumni: A Complete Guide

Other ghosts from the original movie also spook us throughout the new film. By the end, we see reincarnations of classic specters like Muncher, the gooey, metal-eating ghost that flies and spits shrapnel, Zuul the Gatekeeper, and Vinz the Keymaster as Hell-hounds of Gozer, and teeny-tiny yet annoyingly evil Stay Puft Marshmallow Men (instead of a giant possessed Marshmallow Man, of course).

How Do the Spenglers and Friends Stop The World From Ending?!

As foretold, Gozer is summoned when demon dogs Zuul and Vinz successfully possess Callie and summer-school teacher Gary Grooberson (Paul Rudd), who breaks Egon's proton pack system and unleashes all of the trapped ghosts into Summerville. Trevor, Lucky (Celeste O'Connor), Phoebe, and Podcast suit up with ghostbusting gear and head to the mines to stop Gozer before she begins her doomsday. They plan to trap Gozer in a ghost trap and take it back to Egon's farmhouse because all the electrical towers dirt farm he created before he died was actually one giant trap to destroy all the ghosts from Shandor's mine and prevent the apocalypse when Gozer came back. While the kids do successfully trap Gozer, things go awry when they release her, so who ya gonna call? The original Ghostbusters, Peter Venkman (Bill Murray), Winston Zeddimore (Ernie Hudson), and Ray Stanz, arrive just in time to help the kids finish the job. Together (and with a bit of help from the friendly ghost of Egon Spengler, an ethereal CGI recreation of the late Harold Ramis himself), they defeat Gozer once and for all. When Gozer is gone-zo, the Spenglers give one last goodbye hug to Egon's ghost before he disappears into thin air. As the camera pans up to the starry sky, the words "For Harold" appear on screen.

Will There Be A Ghostbusters: Afterlife Sequel?

There's continued speculation about whether an Afterlife sequel is on the way, but Reitman expressed his excitement for the continuation of his father's franchise, even if it's not him directing. During a panel with Entertainment Weekly, he said, "We wanted to make a movie that opened the universe to all kinds of stories. I want to see Ghostbusters movies from all of my favorite directors, and we hope that this movie sets the table for that."