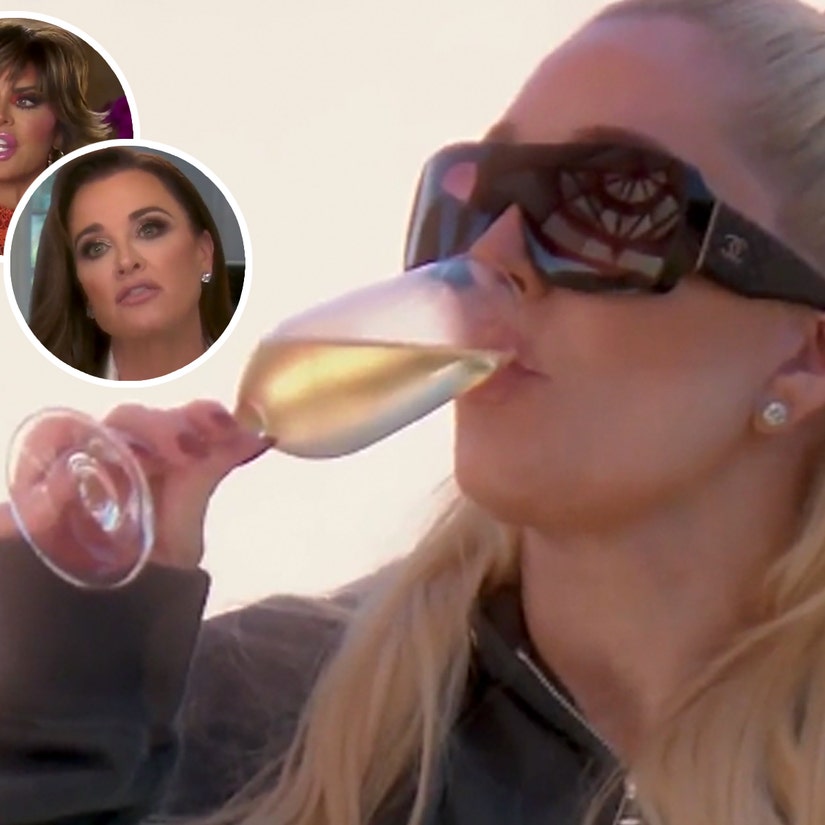 The questions keep coming for Erika Jayne on "The Real Housewives of Beverly Hills" -- and on this week's new episode, the one her costars keep asking is "What about the victims?"

Erika's estranged husband Tom Girardi stands accused of stealing from cancer patients, burn victims and the families of plane crash victims, while money from the firm also went into EJ Global LLC, a company for Erika's performing career. Throughout the season, Tom's legal drama has been at the center of everything and while it's clearly been tough on Erika, her costars have largely been the ones reminding viewers at home that she's not the only one who's been affected by Tom's alleged misdeeds.

As the cast's trip to Del Mar continued Wednesday night, the women all met up for dinner -- after Erika spent the day watching murder docs to ease her mind.

In a confessional, Dorit Kemsley took issue with her comments. "Yeah, he did a lot of good, but if he did the things he's being accused of, he did a lot of really bad s---," she reminded everyone.

As the conversation continued, Erika explained how her son asked if she was hooking up with new neighbor Armie Hammer -- she was not -- and defended her racy Instagram posts, telling them all, "Mommy's broke and paying the bills!" She also seemed very cordial with Sutton Stracke, who has accused Erika of lying about her situation, in a nice change of pace. The situation made her believe there was "hope" for their relationship going ahead.

In her own confessional, however, Erika confirmed she wasn't trying to "smooth s--- over" with Sutton. "No, but I'm not gonna ruin everybody else's trip. See, what a nice person I am. I'm the best one in this group, I don't know why you guys devalued me so much," she added, sarcastically. "Clearly, I'm the most adult."

The next day, Erika met up with Kyle Richards and said she was "feeling better" about everything.

"But, girl, I have zero dollars. And by the time the trustees are done with him, there will be nothing. So I walk out of this with nothing," she then told her costars. "I said that to my lawyers the other day, 'I expect nothing.' And one of my lawyers looked at me and said, 'That is the most courageous thing I've ever heard.' Every day brings a brand new disaster. It's just full of f----ing bulls---."

In footage of Erika sipping on champagne was shown, Kyle reacted to her comments in a confessional. "Obviously, the victims here are the ones that need to be paid the money," said Richards in a bit of shady editing on Bravo's behalf.

READ:  Britney Spears 'Would Like To Tell Her Story' -- How Close Are We To A Tell-All??

Erika and Sutton later mended fences, at least superficially, later that day before boarding a boat for a little cruise. "It's just been rough, honey. And it's something I can't even predict," said Erika, before Sutton apologized. "It's okay. It's okay. I'll get through it, but I had to lash out and I apologize," said Jayne in return.

In a confessional, Sutton said she was skeptical about the apology -- and she clearly had every reason to be. "Do I want to work it out with Sutton? No, no I don't," Erika said in her own, "here's the thing, I'm not gonna ruin everybody else's trip just because I hate Sutton."

When Dorit asked what the two had just talked about, Erika filled them all in.

"My life's in shambles and I'm angry and I'm hurt and it's not Kumbaya, but it's an opening. I'm in a good mood, so the moment is right and she was receptive and there it is. That's all you can do," she told them all. "We're adults and it's not gonna get fixed overnight, it doesn't have to. I'm a good time and I want to be even a better time."

She then addressed how difficult it's been for her to navigate her current legal and personal predicaments.

"I have to walk a very fine line, there are a lot of people looking at me and if I look like I'm having a little too much fun, I'm not remorseful," she said. "If I look like I'm looking a little too good, I have no shame. So I'm damned if I do, damned if I don't. I want to have fun, I want to laugh, but if I laugh too much I get criticized for that. Then if I hang my head in shame, I'm clearly guilty ... I cannot win."

In a confessional, Lisa Rinna was the next one to mention the people Erika wasn't. "Everyone just wants her to say, 'God I feel terrible, the poor victims,'" said Lisa, "but I think Erika's lawyers have said to her, 'You can't talk about anything,' because all of a sudden she's connected to it."

The episode ended with a game of Never Have I Ever, which got off to a rocky start with Garcelle Beauvais throwing out, "Never Have I Ever Stolen Anything." Though she simply said she hadn't in front of the women, Erika was clearly annoyed by the prompt in a confessional. "Say it or don't say it. I don't like that s---. Never have I ever stolen anything, really?" she said, "Neither have I, c---."

After Kathy and Erika also fessed up to having sex in a doctor's office or hospital, the session ended with Garcelle asking whether any of them had used a strap-on on one of their partners. None of them had, but Erika said she would. "If it was right and the right partner, I have no problem with that," she added.