After so many years on our screens, the characters of “Downton Abbey” certainly feel almost real to us. As “Downton Abbey: A New Era” hits theaters, we can’t help wondering if the Crawley family is based on real people. While they’re not literally bas… 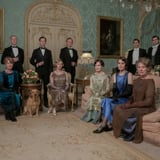 After so many years on our screens, the characters of "Downton Abbey" certainly feel almost real to us. As "Downton Abbey: A New Era" hits theaters, we can't help wondering if the Crawley family is based on real people. While they're not literally based on historical figures, these characters were definitely inspired by an amalgamation of people who really existed in that era.

In "The Chronicles of Downton Abbey: A New Era," a companion book to the TV show, series creator Julian Fellowes revealed how he drew inspiration from his own upbringing among the British elite to create some of "Downton"'s most memorable characters.

"My impressive, if tyrannical, great-aunt, Isie, [is] the principal model for Violet Grantham, a woman whose dry wit concealed a good deal of personal suffering and who was no tougher on the rest of us than she was on herself," Fellowes wrote in the book's foreword. He also revealed that Robert, the Earl of Grantham, was based somewhat on his own father, who he called "a deeply moral man, cleverer possibly than Robert, who was always determined to do right, but without ever contesting the structure of his own social universe . . . Like Robert, he strove to do his duty and, also like Robert, he thought that if it were God's will that you should be rich, then He would ensure you were left an inheritance."

To create the character of O'Brien in the first few seasons, Fellowes was inspired by his grandfather's cousin's conniving lady's maid, describing the real-life scheming maid as having "had a black heart, cold and manipulative . . . yet my aunt never saw it." He also explained that the character of Thomas was inspired by a dresser Fellowes met during his theatrical career, that Isobel Crawley drew from his godfather's wife, and that Mary Crawley takes some of her character traits from both Fellowes's wife and his "indomitable mother."

The stories told on "Downton," likewise, are related to real events but are not direct retellings. Over the years, "Downton" has touched on world-shattering events, from the sinking of the Titanic to World War I and the 1918 Spanish flu outbreak. It has also covered real events that viewers who aren't history buffs might not recognize, such as the Teapot Dome scandal or the Beer Hall Putsch. On a broader scale, the "Downton" universe is basically about the real-life decline of the aristocracy and major societal shifts in the years following World War I. While the characters and events of the show aren't based on any specific true story, they're very much based on several true stories that real people dealt with for years.