“Doctor Strange in the Multiverse of Madness” has a lot on its plate. There’s, of course, the journey of its main character, Dr. Stephen Strange (Benedict Cumberbatch). Then, there’s the emotional and physical devastation of the film’s antagonist, Wan… 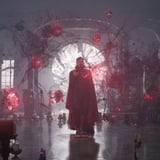 "Doctor Strange in the Multiverse of Madness" has a lot on its plate. There's, of course, the journey of its main character, Dr. Stephen Strange (Benedict Cumberbatch). Then, there's the emotional and physical devastation of the film's antagonist, Wanda Maximoff, aka the Scarlett Witch (Elizabeth Olsen). Additionally, the movie introduces America Chavez (Xochitl Gomez), gives Christine Palmer (Rachel McAdams) a lot more to do, and delivers some classic moments for Wong (Benedict Wong).

All of these plots come barreling to a head at the end of the movie. Wanda has captured Wong and America and has them trapped at the top of the mountain where the spells contained in the Darkhold came from. Wanda is moments away from taking America's multiverse-hopping power, which would allow her to control every universe in existence. Meanwhile, Dr. Strange and Christine are trapped in another universe where he has to fight off another Dr. Strange in order to get his hands on a copy of the Darkhold himself, so he can access his original universe, Earth-616, and help save America. We learn that this Dr. Strange was deeply changed by using the book and now has a visible third eye on his forehead. But Dr. Strange wins the battle and gets the book.

Using the spells in Darkhold, Dr. Strange reanimates the corpse of another Dr. Strange, who came over in Earth-616 with America at the start of the movie. The spirits of the damned warn him that possessing a corpse is extremely cursed magic, but with no other choice and Christine's support, he carries on. Using the (frankly horrifying) corpse, he's able to free America and convince her that she can control her multiverse-jumping powers. America uses the multiverse to revisit the Billy and Tommy from another universe viewers met earlier in the movie, and Wanda realizes that her sons fear her now because she took their actual mother away from them. She can never go back and reclaim her family.

READ:  Planning My Funeral! My Kids Triggered Me! Defending Myself! How My Brain Works! | Perez Hilton

Wanda tells America and Wong to flee, and she brings down the mountain on top of the Darkhold and herself. This destroys every Darkhold in every universe, and Doctor Strange and Christine wait for America to bring them back to their respective home universes.

"Doctor Strange in the Multiverse of Madness" Ending

After the rescue, back on Earth-616, America is training with Wong at Kamar-Taj to learn to be a sorcerer. Wong asks Dr. Strange how he's doing after he used the Darkhold, which, the movie reminds us many times, always leaves a mark on its user. Dr. Strange assures him that everything is fine.

But the last scene in the movie reveals this isn't true. Dr. Strange is walking through Manhattan when he hears a buzzing in his ears. He falls to his knees in the middle of a crosswalk and cries out in pain. Looking to the sky, a third eye opens in the middle of his forehead. Then the credits begin. If that scene left you wondering if this means Dr. Strange is evil now, like the alternate-universe Dr. Strange who also had a third eye, the first credits scene helps clear things up.

"Doctor Strange in the Multiverse of Madness" First Credits Scene

In the first credits scene, which comes in the middle of the credits, Dr. Strange is happily walking down the street again. It seems that he hasn't gone evil - he's just dealing with this third eye situation. All of a sudden, a woman appears through a portal: Clea, played by Charlize Theron. Clea tells Dr. Strange that he caused an incursion - when two universes come too close together and start to be destroyed - and she needs his help to fix it. We see Dr. Strange's third eye open again before he jumps through the portal with her.

READ:  Melania Trump Slams Anna Wintour For Putting Dr. Jill Biden On The Cover Of Vogue & Not Her

Clea is a new character in the MCU, but in the comics, she is a sorceress who helps Dr. Strange. They eventually fall in love and marry. If there is a "Doctor Strange 3," it seems she'll be a big part of the plot.

"Doctor Strange in the Multiverse of Madness" Second Credits Scene

The second credits scene, which comes at the very end of the credits, is just for fun. Earlier in the movie, after they travel to another universe, America inadvertently steals food from a street vendor called Pizza Poppa (Bruce Campbell). To get away from him, Dr. Strange curses him to punch himself in the face for three weeks. In the credits scene, Pizza Poppa finally stops punching himself in the face and smiles as he declares, "It's over."

It's not quite clear what Dr. Strange's third eye makes him capable of doing in the MCU. In the Marvel comics, Dr. Strange has the Eye of Agamotto, which gives him access to this ability. The eye can show truth, emit a strong light, and play back recent events. But in the MCU, the Eye of Agamotto is the necklace Dr. Strange wears, and before the events of "Avengers: Infinity War," its power came from the time stone. Dr. Strange wears it again in this movie, but it doesn't play any part in the plot of the film, and it doesn't seem connected to his third eye at all. In the comics, the eye can only be used by a pure sorcerer, but in "Doctor Strange in the Multiverse of Madness," Dr. Strange only has access to it after using spells from the evil Darkhold. Fans will have to wait to see what powers Dr. Strange's third eye gives him.