“A lot of professionals warned me that it would affect my hireability.”

Actor and beloved Disney star Alyson Stoner knew what was at stake when she wrote her 2018 Teen Vogue essay, in which she came out as queer. “It was a risk to let people know this authentic part of me because I had an established career with a different set of identity markers,” she tells STYLECASTER. “A lot of professionals warned me that it would affect my hireability.”

Stoner, who is known for roles in Step Up, Cheaper by the Dozen and Disney Channel’s Phineas and Ferb, was dating her first girlfriend at the time she wrote the essay. “We reached a point where it was causing more damage to hide than to come forward,” she says. “I wanted to create a safer environment for her to feel comfortable when we were in public or with family. I knew it was a risk but I stand by the decision because it showed me the power of love. Now, what happened as a result is very complicated, but such is life.” 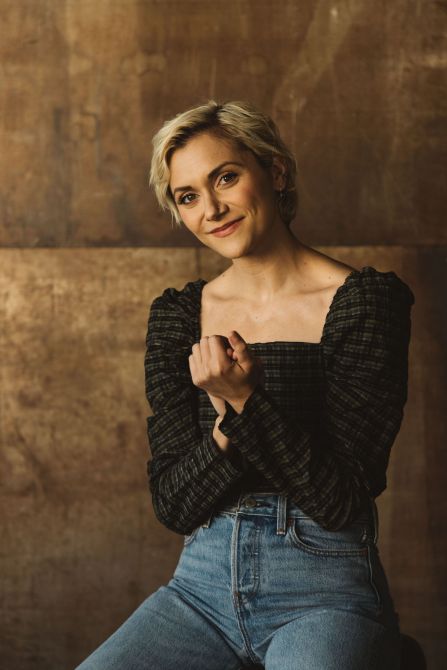 Still, Stoner doesn’t look back with regret. Despite what’s happened, Stoner has also seen a lot of support from others welcoming her into the LGBTQIA+ community. “On the flip side, I recognized this whole other world opening up of people who really were accepting, and not just willing to include but eager to embrace the rich diversity of humanity,” says Stoner, who plans to release an an e-book on June 7 in honor of Pride Month. The book, which is available on her website and comes with access to Stoner’s “7 Days of Pride” movement courses, encourages queer people to reconnect with themselves, honor their well-being and celebrate their individuality by focusing on the connection between their mind and body.

Coming forward was a decision to let more of Alyson be seen.

“Coming forward and writing the article was a decision to let more of Alyson be seen,” says Stoner, who plans to launch her wellness platform named Movement Genius in July. “It felt vulnerable because, by having an opinion, I realize I may not appeal to as many people. As someone who grew up auditioning and winning people’s approval for a living, that can be really scary because you feel like you’re being cut off from your lifeline. In a way, it felt like a brave decision to define myself in one way knowing that it might chart a more particular course. Certain paths would narrow and then others would open up.”

Ahead, Stoner talked to STYLECASTER about why she decided not to label her sexuality in her essay, the first time she felt represented in the media, and the misconceptions Hollywood still has about the LGBTQIA+ community. 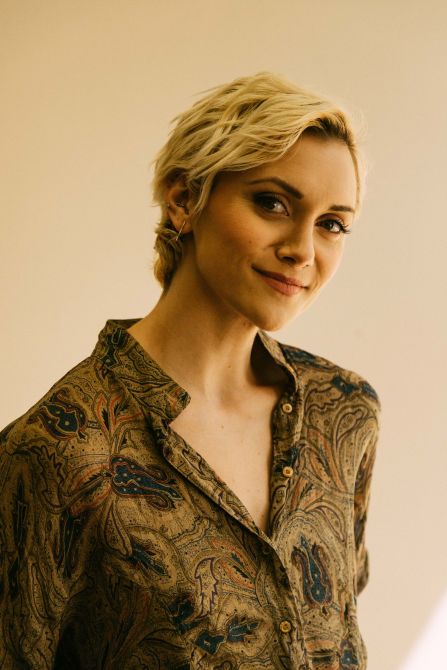 On the mixed reactions to coming out

“Most people assumed, based on how I presented myself through characters, that I was queer and in some ways, I was able to laugh alongside people and in other ways, it hurt because it’s almost like someone was in on the secret and I didn’t know it. I didn’t necessarily choose the characters I portrayed or understood why I was hired. What sensibilities or qualities would categorically be defined as queer stereotypes? But the response [to coming out] has been overwhelmingly positive. I will say though, as someone in the public eye, I experience life as I’m a blank canvas and everyone projects their perception of reality onto me, so my DMs reflect the smorgasbord of human perspective. One DM is like, ‘Congratulations. Welcome to the club.’ The next one is like, ‘Repent! Repent! Repent!’”

On why she was vague about her sexuality in her essay

“I’m still uncovering. At this point, everything in life feels pretty damn fluid. It’s such a complicated thing to name when each of our interpretations of terms are subjective. I kept it that way because, one, I’m still unpacking, two, because I wanted it to be more about humanizing and dignifying a living conscious sentient being as opposed to, depending on my answer, how your treatment and your conditions will change. I wanted to get to the heart of it, so everyone could find themselves in the article.”

At this point, everything in life feels pretty damn fluid.

On the most significant time she felt represented in the media

“Rain Dove. They’re a model. I don’t know a ton about their career, but I believe they represent as both feminine and masculine and present as both man and woman in different campaigns. For me, it was about seeing androgynous and fluid representation, and I also had to confront my own internalized homophobia and queerphobia because I recognize I have been carrying a lot of judgment about different parts of myself. To be able to see someone else embody it in confidence, that’s what was most startling and liberating. Honestly, it’s also non-queer folks. I don’t know how Pharrell identifies. I don’t know how Tilda Swinton identifies, but it was people who are outside the lines creatively and consciously.” “It wasn’t until I met a woman named Veronica Graye, who I work with on styling. She has a literal superpower of being able to tell your authentic human story visually and through fashion. It was not until I met her and she had this rack of clothing items, that I wouldn’t try on alone, that I felt completely full in my queer identity and really, really empowered. It was one thing to see representation in media. It was another to see myself dressed for an event, making a statement on the red carpet as my full self.”

On a misconception Hollywood has about the LGBTQIA+ community

“I want to reach a point where queer representation can be mundane, boring and ‘normal.’ It doesn’t have to be outlandish. It can be in costume. It doesn’t have to be. I, personally, am an introvert. I live a very simple, minimal life, and if you were to encounter me in the street as a stranger, there may be no physical or verbal cues that let you know my sexuality is queer. I would love to reach a point where we don’t always have to wear it visually, and it can just be threaded into someone’s humanity. We’re starting to see that. My favorite is when you watch a show and it’s not the topic of interest, and it’s just a facet and you don’t have to make the entire series about it. But all of it is important—to be overt and be direct and to celebrate how much we do color outside the lines, but also how normal and every day we are. We’re your neighbors. We’re your teachers. We’re your sisters and friends.”