That Green Hornet tale might’ve stung a little…
Nicolas Cage thinks Seth Rogen is “a good storyteller”… and the jury is still out on whether that is a genuine compliment or a backhanded one.
While promoting his book o… 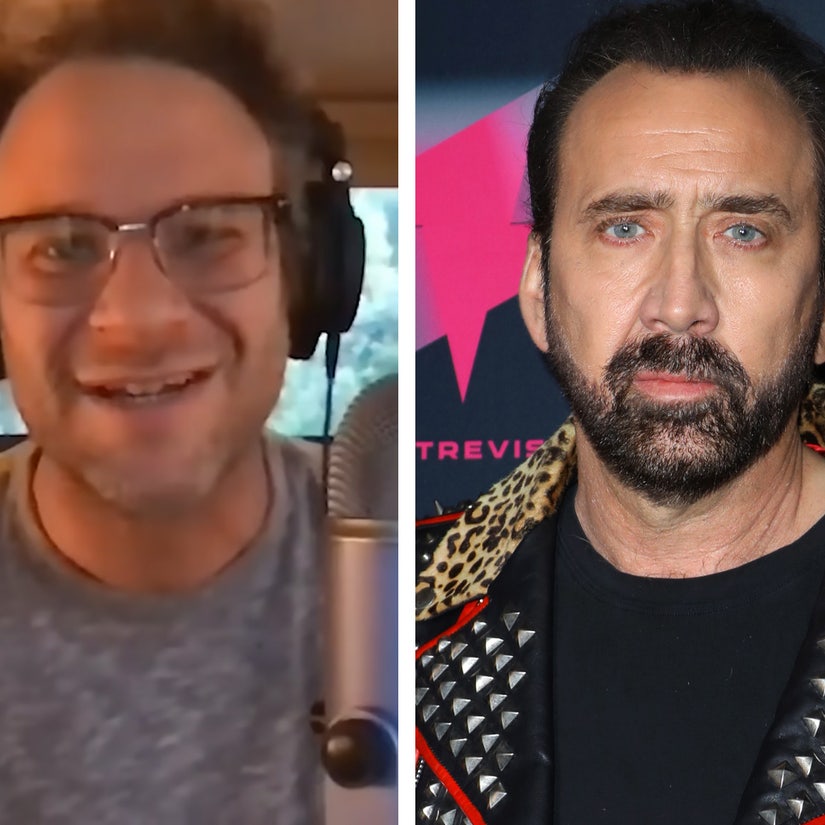 Nicolas Cage thinks Seth Rogen is "a good storyteller"... and the jury is still out on whether that is a genuine compliment or a backhanded one.

While promoting his book on "The Howard Stern Show" last week, Rogen told a bizarre anecdote about his fellow actor that featured tattooed hair, some fake lips, a Jamaican accent and a stolen James Franco character, which prompted a friendly response from the "Face/Off" star. Or was it?

The tale began, as Rogen was telling Stern, with Cage originally lined up to be the villain in his 2011 superhero flick "The Green Hornet"... but he had some very different ideas about what the antagonist should be.

"The thing that stuck out first in my head was 'I want to tattoo hair on my head. I can be a bald guy with hair tattooed on his head,'" Rogen recalled. "With big fake Edward Robinson lips."

Rogen said just as he and co-writer Evan Goldberg were trying to get their heads around the idea, Cage called back shortly afterward to say he actually didn't want to do the tattooed hair in the movie... because he was thinking about doing it in real life.

"I remember laughing hysterically when he said it on the phone, and then stopping and realizing it wasn't a joke," Rogen said, laughing again. "I remember going like 'oh good one!' ..... oh he's totally serious."

He said that after a while, Cage came back with another idea, in which he wanted "to play a white Bahamian man, from the Bahamas. Essentially it was pitched as like a white Jamaican guy, basically."

"It set off a lot of alarms," Rogen laughed. "Not that a white Jamaican man is bad, but doing the accent and all this stuff seemed like it was a world of trouble."

He said studio head Amy Pascal insisted they all just talk it out at her house and figure it out; While Goldberg assured him it would not be awkward and there was no way Cage would actually go into character at the meeting, Rogen said it took exactly one minute for that to happen.

"Literally, we show up at the house and within 60 seconds we were all seated in the living room as he stood in front of us reciting a monologue in a Jamaican accent," Rogen said. "We were all just like, 'what's happening?'

"And a monologue, I should add, that was not in the script - nor did it have anything to do with the script. At which point I was like, 'I don't think he's read the script, honestly!' There was no indication he had any idea what film we were trying to make in any way, other than it was called 'The Green Hornet' and there was a villain in it."

Cage apparently concluded his performance — standing in silence "like he's just landed a backflip and he's waiting for the applause" — when everyone looked to Rogen for a reaction.

After awkwardly telling him "Okay cool! Thanks! We should talk about it, that's not how we pictured the character", Cage supposedly instantly got sullen, made an excuse and left.

But the story didn't end there: years later Rogen and Goldberg were considering signing on as producers to another movie that was to star Cage, when his manager reached out to set up a meeting, which they assumed was going to be about the project. It wasn't.

READ:  Cardi B Wore A Metal Bikini At The GRAMMYs, Because Why Not

According to Rogen, Cage accused him of telling James Franco about his white Jamaican idea which he seemed to think served as inspiration for the rapper Franco played in the 2012 film "Spring Breakers".

"We sit down and right away he's like 'Did you tell James about that meeting we had? The Jamaican meeting? Because that character in 'Spring Breakers'... was that based on the character I did for you guys?'"

After assuring him it wasn't, Rogen said Cage "very clearly didn't believe me."

On Saturday, Cage responded in a statement to EW.

"I like Seth," he said. "He's a funny guy and clearly a good storyteller. I wish him luck with his book."