Denzel Washington, like many Black actors, idolized the late Sidney Poitier. During an appearance on Jimmy Kimmel Live on Monday, Denzel recalled the moment he met Sidney, Hollywood’s first Black movie star, and how their friendship progressed. Th… 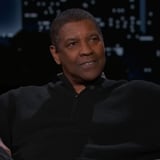 Denzel Washington, like many Black actors, idolized the late Sidney Poitier. During an appearance on Jimmy Kimmel Live on Monday, Denzel recalled the moment he met Sidney, Hollywood's first Black movie star, and how their friendship progressed. The first time the two powerhouses met was when Denzel was starring in A Soldier's Play off-Broadway in the early 1980s. "He came to see the play, and he came backstage and took pictures with all of us," Denzel recalled. "Everybody was sort of thinning out and he came over to me and he says, 'You know, you're good, you're very good.' I was like, what do you say? It was Sidney Poitier. 'Yes, sir, thank you!' . . . I'm glad I didn't know [he was in the audience]. That's never good. . . . It takes you out of the play."

From then on, the two actors became close friends. Denzel shared with Jimmy that he would often record conversations with Sidney on audio and video to keep for himself. "I would just go over to his house and hang out and visit him and record him," he said. "I have all kinds of tapes of him talking about stuff." The Macbeth actor added: "I heard Sidney Poitier curse. . . . He used them all. I was like, 'Oh, not Mr. Tibbs!'"

Sidney died on Jan. 7 at age 94. Following the Bahamian's death, Denzel told Today about their cherished friendship. "You know, we had a 40-some-odd-year relationship, so I'm still digesting all of that and he was the beacon. He was the one we all followed and it was an honor to be able to call him a friend," he told the outlet. Sidney was the first Black actor to win best actor at the Oscars, and Denzel is one of three other Black actors to have won in that category. Watch the clip above!